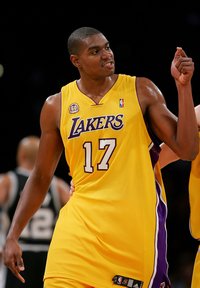 Andrew Bynum is 20 years old. He was a part of Phil Jackson’s starting rotation for only a few months, during which he performed admirably, and he’s coming off a major knee surgery that caused him to miss much of the previous season.

In the mind of his agent, David Lee, the Lakers should have thrown heaps of money at the young man long before the 2009 campaign began.

Mr. Lee, who’s meeting with Laker GM Mitch Kupchak today in the hopes of striking a deal, is singing a familiar tune to the one he broadcasted back in July. From the LA Times:

“I just don’t get it,” Lee said. “I do not understand certain things that happen. Andrew has taken everything the Lakers have thrown at him, including criticism. He doesn’t do anything to respond other than go on the court. He just goes on with his business.”

If the Lakeshow doesn’t sign their prized big man by the end of the month, he’ll become a restricted free agent next summer. And according to his nutty agent, there will be “consequences”.

For all of the promise that Bynum has shown, that’s really all it is: promise. Though I (and many other Laker supporters) have little doubt he will, Bynum has yet to prove that he actually deserves the kind of scratch his agent is clamoring for.

Patience is a virtue; it is also something agents have apparently never heard of.