Are Mechanics the Source of Bargnani’s Struggles? 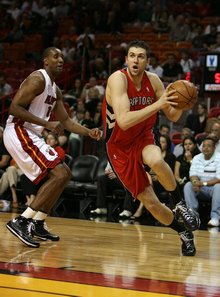 Andrea Bargnani, the first overall pick in the 2007 Draft, had a bit of a down year last season, drawing the ire of Raptors fans in the process.

Despite being healthy most of the season, Bargnani’s offense struggled, and it was clear that the Italian was having a difficult time adjusting to life in the NBA.

Andrea’s coach, Sam Mitchell, recently sat down with the local media, and tried to explain away the smooth-shooting forward’s struggles. From Hoops Addict:

“It’s a lot of technical things with Andrea. It’s the weirdest thing, someone told me they teach players to jump off the wrong foot when they drive to the basket in Europe. I’m right-handed and I’m trying to jump off my left leg, every time. Andrea’s right-handed and a lot of times he plants with his right leg. Jay Triano was telling me they teach them that over in Europe because a lot of times if they take that extra step they call them for traveling. So we’ve been trying to break Andrea of something he’s been doing for how many years?

Fundamental mechanics slightly off-kilter? Hmmm. Call me crazy, but isn’t that something team scouts should’ve spotted well before they made him the top pick in the Draft?