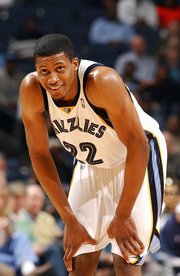 -From the sound of things, David Stern is going to murder someone at the League office in cold blood because of this ref scandal.

“This is the Stern everyone knows,” an Eastern Conference official said, one of many afraid to say anything publicly in fear of Stern’s wrath. “He’s known for knowing everything he needs to know, for always being on top of his game and being extremely protective of the NBA’s image. There are people who will question that now. Who will wonder if this happened because he was asleep at the wheel, which is ridiculous.”

“So in Stern’s eyes, this entire fiasco is not only a blemish on the NBA’s record, but his own. God help us all.”

(Man, what I would do to be a fly on the wall when Stern goes ape sh*t on some poor soul.)

-Tim Don-a-gie’s father (who’s now a retired ref) must be going through hell.

-Ronnie Price is now part of the Utah Jazz. When he runs into new teammate Carlos Boozer, it’ll be a little awkward to say the least.

-Chris Paul, Andre Iguodala, Gerald Wallace, and Rudy Gay played a game of 2-on-2 while wearing those super-tight motion capture suits for the NBA 2K8 video game. It took place up at the Rucker last night and it was Paul’s first run since undergoing surgery on his left foot.

(I love how the Foxsports website didn’t accept Rudy’s last name, and instead called him “BLEEP”. Amazing. Oh, by the way, am I fired for linking to a Dime story?)

-And finally for today: For some odd reason, I feel compelled to attend Sen. Robert Byrd’s next speaking engagement. As long as he says the word “barbaric” a lot, I’m good.