Staying Stuck In The Mud 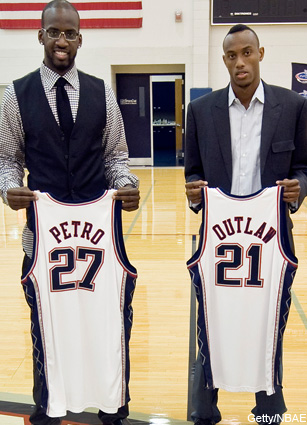 Bad teams are bad for a lot of reasons. Typically, it’s because they’re terrible at free agency and/or the Draft. Bad draft picks are forgivable—after all, teams are trying to project how teenagers will be playing a decade later, and we’ve all fallen in love with prospects who don’t pan out. So let’s focus on the free agency thing.

Bad teams have always had a tough time luring big free agents, but that doesn’t mean they haven’t been spending money. The impatient bad teams try to force their way into relevancy by overspending in the free agent market. Since typically the better, smarter, bigger market teams with deeper pockets pick through all of the elite FAs early on, suddenly, the Detroits and Torontos of the League are sitting on $15 or $25 million in cap space and the top names left are Ben Gordon, Charlie Villanueva and Hedo Turkoglu. That’s how this and this happened in ’09, anyway.

Here’s my theory: The more superstar free agents in a given class, the more bad contracts will be handed out that summer. I’m not counting giving max money to the likes of Joe Johnson or Rudy Gay or David Lee—it’s too much for those guys, but there’s something to be said for landing sure-thing productive players.

I’m not even criticizing contracts given to young guys who are hopefully on the rise. Tyrus Thomas’ five-year, $40 million deal in 2010 is a good example of this. Depending on how you feel about Tyreke Evans, his shiny new $44 million contract might seem pretty unreasonable. But the Pelicans are taking a chance on a young guy they hope is about to hit his prime, and I can’t really fault them for that. The Blazers rolled the dice on Nicolas Batum last year in a similar situation and it worked out.

The killer contracts involve mediocre teams and mediocre players who have plateaued, and whose production could be nearly matched by a different player at a fraction of the cost. It’s usually OK for great teams to overspend on those guys to fill in the final holes—Miami committed about $65 million long-term to Mike Miller, Joel Anthony and Udonis Haslem in 2010, but they won two titles in three years with them. When bad teams try to pull off the same stunt, though, it always fails miserably.

Bad contracts are nothing new. There were the Big Three in ’09. In 2004, 29-year-old Mark Blount got a six-year, $41 million deal. The Knicks gave Jerome James $30 million over five seasons in 2005. Jim McIlvaine’s whopper of a monstrosity in ’96 ultimately led to Shawn Kemp’s departure from Seattle. The list goes on and on and on.

For the sake of this story, though, I’ll trace them back to 2010, when the NBA saw an all-time free agent class hit the market, and an unbelievable amount of stupid money thrown around by GMs across the League.

Holy shit! Combined, those 12 form a $72.23 million annual payroll—above the luxury tax line without a point guard. There’s literally not a single guy on that list who could start on a real playoff team (I.e. not ’12-13 Milwaukee), and the only player I’d feel comfortable giving more than six minutes is Amir Johnson…and each of them got at least a four-year pact with the exception of Petro, whose first year in New Jersey was legitimately one of the worst basketball seasons ever played.

Gooden, Haywood, Outlaw, Kleiza, Childress and Darko have been amnestied. Only Frye and Johnson are still with the teams that signed them in 2010. (PS: Darko was acquired with with cash considerations for Brian Cardinal five months before Minnesota signed him. As in, he was less valuable than The Custodian.)

You could do a lot worse than these two. Nobody was clearing the books to try to lure the likes of Nene, Chandler, West or Gasol. Additionally, only a couple of the top players on the market jumped teams. Ultimately, not many teams had huge cap space and not many teams had to scramble to fill rosters after striking out on Plan A.

The new CBA, which debuted in immediately after the lockout, had a lot to do with curbing the amount of regrettable contracts handed out. The agreement made contract lengths shorter and salaries lower.

Phoenix spent on Beasley after NOLA matched their max offer on Gordon. The Raptors gave Fields that offer sheet to prevent him from being traded by New York to Phoenix for Nash, who Toronto wanted. New York overpaid for Novak after an awesome season and got duped into thinking Camby had more left in the tank than he really did. Dallas whiffed on Deron, but was smart enough to sign guys to one-year contracts and keep the flexibility going forward.

Beasley attempted very nearly one shot per two minutes on the floor last season—a rare feat for anybody who played even slightly reliable minutes. One year down, two to go.

2013
Top Free Agents: UFA: Dwight Howard, Chris Paul, Josh Smith, Andre Iguodala, Al Jefferson, Paul Millsap, Monta Ellis. RFA: Nikola Pekovic, Jeff Teague, Brandon Jennings.
Panicked Teams: Mavericks, Hawks, Bucks.
Over the past few seasons there have been a bunch of examples of teams failing to properly recover when Plan A falls through. The one thing you don’t want to do is give out long-term money to guys exiting their primes. Right? We’ve learned that much, right? I mean, at the very least teams should be doing what the 2012 Mavs did or else throw money at a guy with upside, right? RIGHT?
Bad Long-Term Contracts:
Jose Calderon, Mavericks—4 years, $29 million
Kyle Korver, Hawks—4 years, $24 million
Kevin Martin, Timberwolves—4 years, $28 million
Zaza Pachulia, Bucks—3 years, $16 million

I don’t totally hate the Calderon contract. Dirk is 35, and I understand not wanting to waste a year of his career at this point. Dallas grabbed Monta Ellis with a not-so-bad contract (three years, $25 million), and should have some wiggle room next summer, though it will be largely tied to what Dirk’s I’m Retiring Here extension/pay cut looks like.

Calderon runs a nice offense and his teams do pretty well when he starts, but giving him a four-year deal is ludicrous. It’s just hard to imagine which teams the Mavs were bidding against there. Most teams have point guards at least as good as Calderon. The teams that don’t either didn’t have enough money to match Dallas’ offer (New York, Miami) or are rebuilding and wouldn’t give a 31-year old four years. Do they really want Jose Calderon in 2017?

The poor Hawks, who literally have not been in the Conference Finals since moving to Atlanta in 1968, finally had a prayer. They cleared out massive cap space while keeping cornerstone Al Horford, and then stole Paul Millsap for $19 million over two years. With the Jeff Teague situation still up in the air, the team had about $25 million to play with. They decided to spend about a quarter of it on a four-year deal for a 32-year-old spot-up shooter. They could have had big cap space again next season with a Teague/Horford/Millsap core, but instead will likely have shy of $10 million to spend with a Teague/Horford/Millsap/Lou Williams/Korver lineup. They limited their ceiling in a big way.

I don’t know what Minnesota’s initial plan was, but I hope it wasn’t spending lots of money on a declining 30-year-old shooter who shot 38 percent in the Playoffs and can’t play defense. Couldn’t they have signed Marco Belinelli for half the years and 21 percent of the money to pack a similar offensive punch as Martin? Long-term, Kevin Love will be a free agent in 2015. With this summer’s moves, Minnesota will be strapped in ’15, unable to improve the roster to give an already grumpy Love a reason to stay. I think they’re really going to regret the Martin signing.

In the midst of letting everybody go to clear cap space, the Bucks signed Zaza to join a crowded frontcourt (Sanders, Ilyasova, Udoh, Henson, Delfino, Ayon). They could have just signed Ronny Turiaf to be 70 percent as good at 20 percent of the cost. Or just not bothered at all since nearly their entire roster is 6-10 or taller. Milwaukee is in denial about their transition period, which is an extremely dangerous phase. They could have entered a new era, but will instead keep picking between 10 and 18 (though maybe that’s a good thing, since Yi Jianlian and Joe Alexander were their last two top-nine picks).

Why Does This Keep Happening?

Maybe the most blame falls on the owners, who don’t allow their front offices the time to properly construct a roster. It’s easy to say that teams like Phoenix and Toronto should tank in the name of stockpiling high draft picks and money, but there’s a thin—and maybe non-existent—line between being in a fun rebuild mode and being horrible year after year. For some franchises, putting a seventh-seed product on the court in the short-term will always trump pitching big cap space and a top draft pick to fans. There’s nothing really wrong with that, but it’s not how winning teams are built.

We also can’t forget that some front office members aren’t great at their jobs. That’s why 12 guys were grossly overpaid in 2010, and it’s why within the first five days of ’13 free agency, four guys inked deals for way too many years at way too much money. And that’s why it’s all going to happen again in 2014, probably in the most horrendous way since the infamous Summer of LeBron.

A year from now, James, Kobe, Dirk, Wade, Melo, Pierce, Deng, Bosh, Gay, Pau and Z-Bo can hit free agency. Granger, Lowry, Gortat and Bogut will be there too as *gasp* fallback options for teams that whiff on their top targets. The group of restricteds will feature Paul George, DeMarcus Cousins, John Wall, Greg Monroe, Larry Sanders, Derrick Favors and Eric Bledsoe. Miami, Lakers, Dallas, Cleveland, Washington, Orlando, Philadelphia, Detroit, Utah and, wait for it, Phoenix and Toronto are all set to have varying degrees of cap space ranging from “we can get one max guy” to “we can get every free agent in every sport.” Additionally, Chicago can enter the race if Deng walks and they amnesty Carlos Boozer (they will). With the Bulls in the mix, there will be at least 12 teams looking to spend big, with roughly 10-15 max guys available for the taking.

We saw a similar overall picture in 2010, and it ended in a majestic display of shortsightedness and panic. Should be fun.