Baron Wants to Stay in the Bay; Nellie on the Way Out? 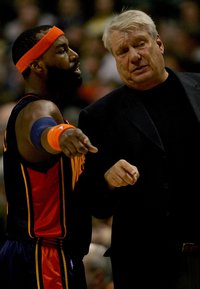 Though his agent has done an admirable job of creating tension between his client and the team, Baron Davis made it clear on his blog that he doesn’t want to wear another uniform.

I want to be in the Bay! I think it’s a great area and the people are great but most importantly I have really good teammates and coaches. And that’s what it’s about… winning.

Whether this means he won’t opt out of his current deal is anyone’s guess. But considering that he’s owed close to $18 mil for next season, and that in and of itself is above and beyond his true market value, it’s not unreasonable to assume that he won’t be opting out this summer.

Now, rumor has it that Don Nelson may have worn out his welcome in Golden State, and much of this seems to stem from the controversial game against Phoenix that eliminated the W’s from Playoff contention, during which Nelson benched Baron Davis for the entire second half.