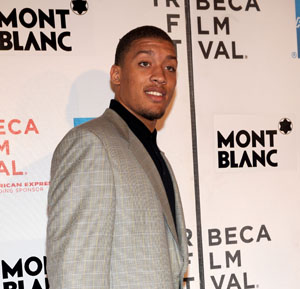 Those of you not in New York may not have heard much about Gunnin’ for that #1 Spot yet, but you should soon; beautifully timed with the NBA Draft and the end of school, it opens in select cities Friday. Freelance writer Lorraine Cwelich attended a screening for the movie (which focuses on players any SLAM reader should be familiar with, and includes clips from past issues of SLAM and PUNKS) today and then wrote the following review for Slamonline:

Fans of the Beastie Boys’ body of work in hip-hop will not be surprised that Adam Yauch (aka MCA) has mixed the most slammin’ sports film soundtrack since DMX rumbled through the veins of Any Given Sunday.

What is unexpected is that the rap pioneer’s non-Beastie directorial debut, Gunnin’ for That #1 Spot, is a funky portrait of the first annual Boost Mobile Elite 24 Hoops Classic at Harlem’s historic Rucker Park. Yauch’s edgy, jangly-nerved hand-held camera work is a collision of fierce dunks and awesome alley-oops, all set to surging hip-hop tracks.

On September 1, 2006, 24 top ranked high school prospects played at the legendary court, which has produced some of the all-time greatest hoops stars, including Dr. J, Earl “The Pearl” Monroe, Wilt Chamberlain and Kareem Abdul-Jabbar, who appear in archival footage.

Their families and coaches keep the players real, grounded and humble. Older brothers grouse about being outgrown and outplayed by their li’l bros, while Greene’s younger cousin delights in reminding Donte that he remembers when he couldn’t dunk.

Of these eight, forward Beasley, guard Bayless and center Love are projected as the highest picks in the Draft.

Like any all-star game, the Elite 24 is heavy on spectacular dunks and points (141-139) and light on defense.  The camera-ready Beasley clearly lives up to his nickname, “The Beast,” during the game, scoring with ease, while point guard Brandon Jennings shines with his dazzling no-look passes and unselfish game.

Gunnin’ for that No. 1 Spot is the must-see b-ball movie of the summer, not only for hoop-heads and streetballers but for fans of any sport seeking the raw truth behind the engines—from sneaker companies to player-ranking analysts and the media—as prospects are groomed for superstardom.
Yauch got the idea for the movie from one of his friends, former SLAM Associate Publisher Kris Stone, who played in a weekly pick-up game with Yauch and mentioned that he was organizing the Elite 24. Yauch, who had previously directed award-winning videos for the Beastie Boys, signed on to document the game.

Yauch’s film is the visual equivalent of his sample-infused rhymes: a frenetic pastiche of techniques including home video, pocket video, slo-mo, fast-forward, hand-held and wide angle. Sometimes the sheer number of styles teeters on the dizzying, like a film student jonesing to try out the latest digital video trick.Overall, though, the effect is virtuoso, particularly the astounding aerial cinematography shot through fisheye lenses.  Two sequences—the swooping journey from Stephenson’s Coney Island to Harlem, over the Brooklyn Bridge and East River, and the careening, cavernous joyride through midtown skyscrapers—reverberate with the Beastie Boys’ love for NYC, from 1987’s “No Sleep Till Brooklyn” to 2004’s “To the 5 Boroughs.”

The film’s soundtrack replicates NYC’s energy, the hip-hop spilling out of car windows and leaking out of Ipod headphones. The Brooklyn native, who knows a thing or two about def jams, gets it, feels it and like an alchemist, makes the screen crackle with 155th Street’s energy and passion.

From the lush opening montage over The Game’s “Hate It or Love It” until the credits roll on Jay-Z’s “Dirt Off Your Shoulder,” from Afrika Bambaataa, N.W.A., Public Enemy, Nas, Fat Joe to M.I.A. (and five Beastie tracks), its beats juice the crowd as the NBA stars of the future thunder down the asphalt.

“The Elite 24 game is supposed to be an organized game, an all-star game…but it really does have a streetball element to it, and I think that’s because the kids know the history of the Rucker, so they want to get out there and make a name for themselves, get a nickname, be able to talk trash and say that they tore shit up at the Rucker,” said Yauch.

“Also because it is an all-star game, the coaches don’t really have a relationship with the players, and there are no plays, so it is more like a pickup game.  So it does has that anarchy of streetball and personally I love that.  I love watching pickup basketball where you are just watching guys’ instincts instead of watching organized plays.”