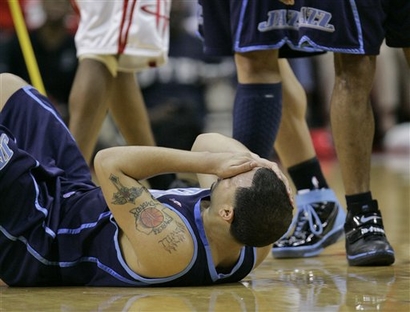 The home teams did what they had to do last night. Detroit handled Orlando with typical Piston cockiness, just knowing they are the better team. Even if they let their guard down and relax, it’s hard to see Orlando winning a game. Turkoglu went off in the first half, Rip couldn’t hit anything, and Detroit still had a comfortable enough lead in the second half.

Houston got off to a bad start, but slowly took over the game from the free throw line. I have to admit I missed the first half hour of the game while watching HEROES, which was GREAT. Ryan and Emry will have more thorough coverage of their respective series later on today, and we’ve got some other non-playoff stuff for you too.

One difference between the playoffs and regular season was the play where Shane Battier cross-checked Deron Williams’ face. Ouch! I don’t know if they’ve announced he has a concussion yet, but he should. On a possession after the collision, he dribbled out of bounds by accident, looking a little woozy. Game 3 is Thursday Night, and it’s not looking good for the Jazz, even on their home court. I have no idea what to make of the whole Andrei Kirilenko crying in front of the media thing. Drago would never cry. He would throw Jerry Sloan through a window. Omega Red would never cry. He would drain the life-blood from thousands of victims. AK-47, a former All-Star, played 17 minutes, picked up 5 fouls and didn’t score a point. He is not even coming close to contributing as much as Shane Battier is. What is going on? The Knicks have plenty of bad contracts they could trade for Andrei. Steve Francis, Channing Frye, and whomever else for Andrei? I would love that. But hey, it’s playoff time and Andrei still has two more games to play in a Jazz uniform. At least two? They can’t go out like this. We’ll see how their home court changes things.

This whole paragraph is SPOILER ALERT CITY if you haven’t watched Heroes or read Watchmen. Heroes is either a great tribute to Watchmen, or a complete rip-off. For those of you unfamiliar with Watchmen, it is to put in the simplest possible terms, the Citizen Kane of graphic novels. It’s the only comic on the list of 100 most important novels of the 20th Century. I can’t recommend any one piece of literature more than Watchmen. It’s a masterpiece. That being said, Linderman = Ozymandias. His plan to rebuild after the fallout is exactly what Ozymandias planned in Watchmen. He also alluded to an earlier generation of heroes that had good intentions but lost their way, which is right out of Watchmen. And most importantly, Sylar was a watchmaker, with a gift for altering and putting things together, before changing into what he has become. That is exactly what Dr. Manhattan was. In the scene at the end of the episode when Sylar does his thing to Isaac, you can hear the sound of a clock ticking. Definitely a reference to the watch gears aspect of what he does to brains. Also, the way Isaac looks, and is tortured as he sacrifices his life was oh so subtly like Jesus. I LOVE HEROES!!!!

Okay, welcome back to those of you who skipped that paragraph. The office softball season begins tonight, and this year I’m just letting my natural abilities flow through me, much like A-Rod. No more overthinking and keeping a journal of at bats like Carlos Delgado. Seriously. You think these NBA superstars crack under playoff pressure? You should see me popping out to third with the bases loaded, followed by a bat toss and bad body language. Positive sign though: I was extra clutch on a pool table on Saturday Night, so I might be turning the corner. Look out for Ryan and Emry’s updates today, as well as a bunch of other stuff playoff related and other basketball posts that have nothing to do with Heroes or softball.