“Big Baby” Likes What He Sees in the Mirror 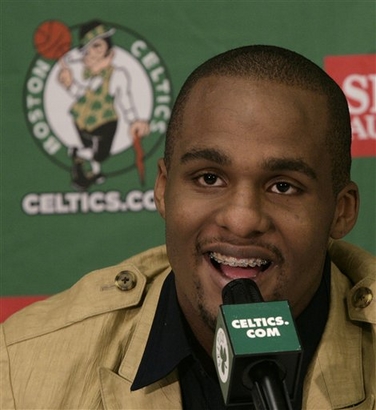 “This was really where I wanted to be. I want to retire in Orlando,” Howard said. “Me and Mickey Mouse will be here forever.”

-Glen “Big Baby” Davis likes to look at himself in the mirror.

It hasn’t escaped the notice of observers at Celtics practices that Glen Davis gazes into the large mirror at the end of the gym floor during nearly every break in the action.

“He’s got a lot of bad habits we need to work on,” said assistant coach Clifford Ray with a smile.

-The NBA is starting up an enormous 2-on-2 tourney in China. (Via: YAYsports!)

-Here’s an update on Durant’s shoe deal (Thanks to reader Jeremy E. Miller for the tip):

What will likely happen from here? According to the people I have spoken with today, Goodwin is not at all pleased with my story from yesterday and I’d fully expect him to deny that this secret agreement exists.

Goodwin will also want to keep the focus on an actual shoe deal for Durant and shift the media spotlight away from the $40M promise I reported. As I mention above, my story is picking up steam and interest, so it is in Goodwin’s best interest to change the subject from “secret agreements” to a “signed shoe deal” as soon as possible. Expect a Durant shoe deal to be done before week’s end.

(CNBC’s Darren Rovell is disputing what Sports Business Radio is reporting in regards to Aaron Goodwin’s cut in the shoe deal.)

-Marc Gasol, Pau’s younger brother, is going to stay in Spain next season.

-The mad geniuses at The Wizznutzz with their “incites” on Gil Arenas’s dream to own a private island.