Big Ben and Joakim Noah Aren’t the Best of Friends 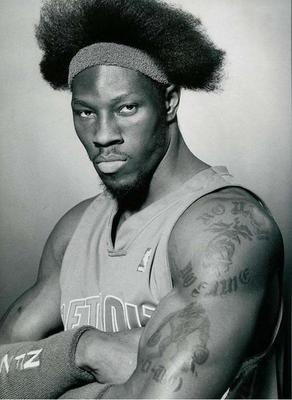 I think it’d be fair to say that rookie Joakim Noah hasn’t exactly endeared himself to the vets on the Chicago Bulls’ roster. On Sunday, Ben Wallace and Adrian Griffin spear-headed a team vote that led to Noah being forced to sit out a second consecutive game as punishment for disrespecting an assistant coach in front of the whole team.

Last night, perhaps not surprisingly, things got testy between Joakim and Big Ben.

At halftime of the Bulls/Magic game in Orlando, as the Bulls were getting their asses handed to them, Noah and Wallace reportedly had to be separated by teammates in the locker room.

Noah walked into the room loudly complaining about Bulls players laughing on the bench, then Wallace confronted Noah, and Luol Deng had to step in and pull them apart, the witnesses said.

Good thing Luol stepped in, because if a fight broke out, I’m not so sure Joakim would’ve come out of it alive.

Whenever I think about Joakim, I picture the d-bag newcomer you occasionally have to deal with at the office. You know the type: Over-eager, obnoxious, a little too loud, and generally the kind of person you try to avoid during the lunch break. And you know what happens to those people? Usually, their contracts aren’t renewed or they get fired pretty quickly. Just saying…