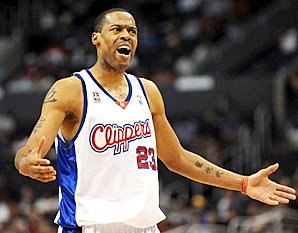 All signs point to Portland and L.A. completing a trade that will send Marcus Camby to the Blazers, in exchange for Steve Blake and Travid Outlaw. (UPDATE: The trade is now official.) This, reportedly, is not sitting very well with Marcus.

Yahoo! is on the case:

In town in advance of their Tuesday game against the Trail Blazers, the Clippers were having a team dinner at Portland’s Ringside steakhouse Monday night when Camby received a call on his cell phone from his agent, Rick Kaplan. Kaplan informed Camby that he will likely be traded to Portland. One league source cautioned that the Blazers’ ownership had yet to sign off on the deal. The Denver Nuggets also are trying to make a last-ditch effort to bring back Camby before the Portland deal is finalized.

After taking the call from Kaplan, Camby immediately walked out of the restaurant. A source close to Camby says that while he recognizes the benefits of playing for a better team, he is upset because his family is comfortably settled in Los Angeles. He had hoped to re-sign with the Clippers this summer. “He likes the Clippers, he likes the organization, he likes L.A.,” the source said. “His wife is happy in L.A. And he’s not one for change. He’s definitely not happy about this.”

Though close to getting done, the deal hasn’t been finalized (team owners Donald Sterling and Paul Allen have yet to give their final blessings.)

With the season-ending injuries to both Greg Oden and Joel “Ghostface” Przybilla, Portland needs all the help they can get get on the inside, especially defensively. Happy to do it or not, this is something Marcus Camby can provide for them.

As for the Clippers, who are essentially giving away their best defensive player for next to nothing, well, some things never seem to change.