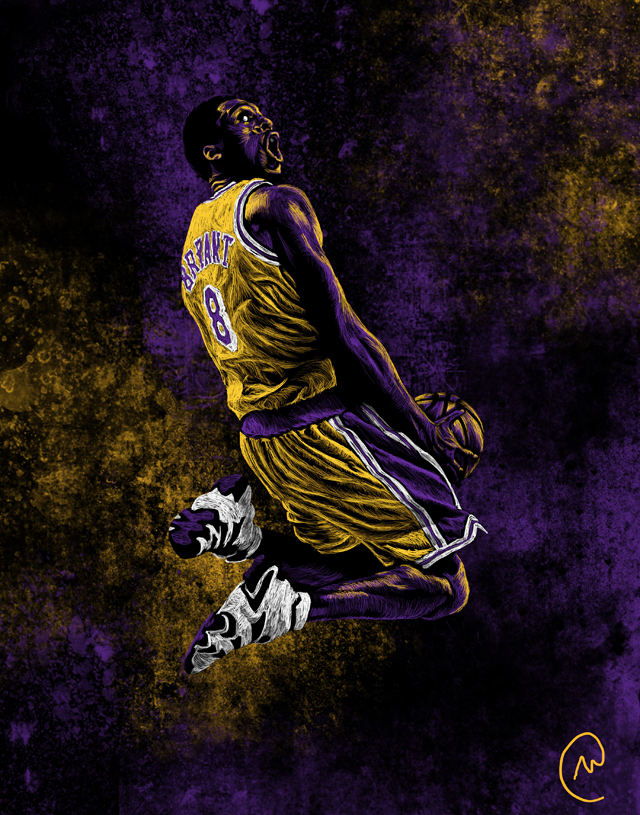 Below is a book excerpt from steven lebron volume 1, a collection of sports writing from Alex Wong. Learn all about the project here.

When Kobe entered the league as a teenager, every interview he did felt like a sales pitch. He was a kid persuading us to think a particular way about him, except he went about it awkwardly, always trying a little too hard, and made it difficult for anyone to truly buy in to what he was selling.

On the court, as a young shooting guard who played a me brand of basketball most of the time, Kobe was viewed as an impediment to his team’s goal of winning a title with Shaquille O’Neal as the focal point. Even after winning three straight NBA titles, Kobe struggled to shake the selfish label that had been bestowed upon him from the very start.

In Shaq’s final season with the team, Kobe arrived at training camp under immense scrutiny after he was charged with sexual assault during the off-season. The criticism that had been directed towards Kobe spilled over from what he was doing on the court into his personal life. Whether it was his off court distractions, Shaq’s impending free agency, the integration of Gary Payton and Karl Malone into the lineup, or the deteriorating relationship between Shaq and Kobe, there were so many things hovering over this Lakers team that it was incredible to see Kobe dominate on the court, even though there were game nights when he had to travel straight from Colorado from court hearings. Not that he needed any extra motivation, but it seemed Kobe brought an even nastier edge and attitude to his game that season. It was incredible, in a strange way where you watch an athlete filter everything out and just channel his energy towards the sole purpose of succeeding on the basketball floor.

None of this should have been surprising to anyone who followed Kobe, because from the start, his singular focus towards basketball—well, besides the rap career he once pursued—was a large part of his appeal. His obsession to become the best player in the league drove him to spend countless hours at the gym, and many more studying film. He added new wrinkles to his game every year, and was well aware of the individual and team goals he needed to attain—whether it be championship rings, or individual scoring records—to place him in the conversation as the greatest ever. Kobe’s insatiable desire to be the best was what pushed him, it was also the only personality trait he needed to sell us in the first place.

It is clear that Kobe belongs at the very top in any conversation about the best players of all-time. Yet, it often feels like a bigger debate than it should be. It is par for the course for us to be overly critical of the players we follow on a day-to-day basis, especially the great ones. Often times, we don’t appreciate them until long after they’ve left the game. With Kobe, this type of attitude is applied to its most extreme form, where his accomplishments are often overshadowed by everything that made him less than perfect.

Sure, Kobe left a lot to be desired during an embarrassing Game 7 loss to the Phoenix Suns, or when the Lakers fell to the Boston Celtics in the NBA Finals, or perhaps he subjected himself to criticism by having such a fractured relationship with Shaq. But no player, and no person for that matter, is without flaws. Even though Michael Jordan ended up with six championships, it took him many years before he finally got his first ring. Further, he was never the nicest person to be around, and even after a scathing Hall of Fame induction speech that drew much criticism, you rarely hear about Jordan’s imperfections when people review his body of work. And when you do hear about it, it is contextualized in a positive light, to reflect on how those traits helped make him the greatest.

With Kobe, it’s the opposite. I’m not sure if there’s a complicated answer to why he is more polarizing than many of the great players who came before him. Perhaps it is as simple as the fact that Kobe has changed so much through the years, that there are inconsistencies about him that seem difficult to reconcile. Or it is because he played a brand of basketball that—while successful at times—was not the most aesthetically pleasing and in line with the grander ideas of the team game. Or maybe it’s just for the simple fact that as we put these athletes under the microscope and demand so much out of them both as player and as individuals, that it’s hard to take a step back and see the entire picture.

But I’m sure when the time comes for us to look back on Kobe’s entire career, we’ll appreciate him as one of the best, and maybe even do so without any caveats.

Alex Wong is better known as @steven_lebron. He writes at his blog and has also contributed to The Classical, Hardwood Paroxysm, FRANK151 and The Sports Fan Journal.