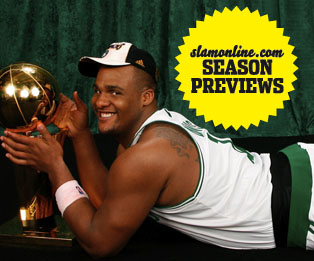 We all know what the Celtics did last year. With the “Big 3” displaying all season long why they garnered that nickname and with the surprise playoff aid of a man by the name of “Big-Game-James” the C’s were able to hoist their 17th banner into the rafters. Although the “3” are a year older (Paul Pierce, Kevin Garnet and Ray Allen will be 31, 32 and 33, respectively) and the team is missing a key reserve, the chances to pulling a “Patriots-like” repeat still remain high.

With the Celtics drafting Univeristy of New Mexico swingman JR Giddens along with Kansas State’s 6’6’’ Bill Walker the green have made a slight attempt to fill the void left by the departure of James Posey. Posey – who opted for more money with the New Orleans Hornets – was an important part of the Celtics stretch playoff run as he was a constant lockdown defender and clutch 3-point shooter.

The Celtics also tried to fill the hole by resigning four-year Celtic veteran Tony Allen (who has put on some major muscle in the off season) as well as the instant sparkplug Eddie House. The C’s have also added one more player in an attempt to fill that void. Darius Miles, who has been out of action for the last two years due to micro fracture knee surgery, is slated to return this season and see time with the champs. With his 6’9” frame, Miles has tools similar to Posey but with a history of injury problems and inconsistent play he will have to prove himself to the Boston faithful. His career averages (10.6 points, 5 rebounds, 1.15 blocks), however, leave room for optimism as it was only two years ago in Portland where the St. Louis kid – who jumped to the NBA straight from High school – averaged his career high of 14 points and 4.6 rebounds per game.

While Cassell was often criticized for his shot selection and inconsistent defense, he did provide veteran leadership from the bench. According to Coach Doc Rivers, Cassell is a coach in the making and even made references to him as a player/coach throughout the year. Even with Cassell back for one more season, the reigns are now completely handed over to Rajon Rondo. Rondo, who averaged 10.6 points, 5.1 assists and 4.2 rebounds per game, must now become the veteran point guard the Celtics desperately need.

The starting five (really the Big 3)

While all these minor details are fun to talk about, the Celtics season really comes down to the starting five. The question of whether Kendrick Perkins can continue in his superb utility big man role is a big one or can Rajon Rondo get stronger and continue to improve his jumper. None of that will matter as much if the Big 3 can again be the BIG 3.

Can Kevin Garnett still dominate the paint on defense or can Ray Allen hit three’s like he did toward the end of the playoffs or maybe most importantly – can Paul Pierce play like an all-star all year? And the last and maybe most important question as always is the injury factor. If the C’s can manage to keep the Big 3 healthy as they were this past year, Boston should be home to the two-time defending Eastern Conference Champs…but that’s a big if.

While it is very tough for teams to repeat in the NBA let alone any sport the Celtics have at least a very good chance to repeat as Eastern Conference Champs. Danny Ainge has quietly impressed since last year and it wouldn’t come as a surprise if come mid-season there is some roster shuffling. A possible PJ Brown type pickup is a very high possibility and may even be necessary. Overall the Celtics are the team to beat in the East…the toughest question will be are they the team to beat in the NBA.

-Looks like the C’s are happy with Doc Rivers as he extended his contract for 3 years.
-While the Celtics headed to Rome last year they will head down a state to Newport, Rhode Island for a miniature Pre-Season trip.
-The Lakers and the Celtics will re-play their last game on Christmas day this season.

For more season previews, go to the archive.