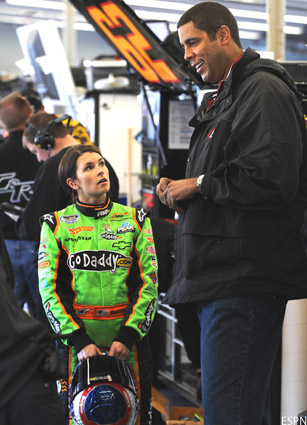 On a sunny September Sunday in Dover, DE, ESPN Nascar analyst Brad Daugherty walked out of a media room situated in the center of the Monster Mile racetrack and past large swathes of fans. A friendly “Hey Brad,” seemed to emerge from every other spectator’s mouth.

Then Daugherty, a five-time NBA All-Star and the No. 1 pick in the woebegone 1986 Draft class, started jogging to the set like he was prepping for a University of North Carolina alumni game. The 7-footer, whose promising eight-year NBA career (19 points and almost 10 boards a game for his careeer) was cut short by multiple herniated discs in ’94, bounded up metal steps to an ESPN production trailer.

It was, in Nascar terminology, “Separation Sunday” in the 2012 Race for the Chase. We sat down with Daugherty at the Monster Mile podium hours before Mark Martin and Jeff Gordon fielded questions in the same location after finishing second and third behind Kyle Busch.

SLAM: Growing up in a small town in North Carolina, you have all these interests: You developed business acumen at a young age; a love of racing sports, Nascar; basketball; you went to college early. How do you balance all of that?

Brad Daugherty: You know, I’ve never really thought about it. I think that’s the biggest thing. My parents taught me as a kid—as well as my brothers—to follow your passions and, if you have an opportunity to participate in something that you love, it’s a blessing. Growing up in the state of North Carolina, basketball—college basketball in particular—and racing were kind of like our state birds. My dad was a huge race fan. All of my family is very athletic, played a lot of sports, so it was a natural thing to play basketball, play baseball, play football, go to the racetrack, work on race cars, build race cars, race cars; it just didn’t seem to be that odd.

SLAM: Were both Nascar and basketball pure loves or was basketball something, like, you’re seven feet tall and…

BD: My brothers were really good athletes. We all played basketball, baseball, football. I actually thought I was a better baseball player than basketball player.

BD: Oh, but I could bring some heat… I mean, I played a lot, but when I got into high school, when I got into the ninth grade, I started to grow, and my buddies and I really started to focus on playing basketball, pickup basketball, because we could go do that in the summertime as something to do as teenage boys. And I got better and better, and I became a better athlete and then I really just kind of fell in love with the game. But it was about the 10th grade before I really fell in love with it.

SLAM: After a slow start, your Cleveland teams became mostly a pillar of consistency; good teams, made the Playoffs, but didn’t get too far. I’m curious what some of your specific memories are that you still carry to this day.

BD: Being there the first year. I come from North Carolina and it was all about basketball, it was all about tradition, all about being organized and doing all of this type of stuff. And I go to Cleveland and they had just hired a coach. They just hired a GM, literally days before I walked in the building. It was complete disarray. It was kind of a ragtag basketball organization. And I was just really blown away at how unorganized and how patchy and spotty things were.

BD: Yes, exactly. And I’m looking at the guys that they had on the team. They had, I don’t know if you remember Edgar Jones and some of these guys. These guys were nuts. There were guys smoking cigarettes and it was just crazy. I didn’t know what I’d got myself into and I’d looked at their histories. They hadn’t won anything. They were terrible. They didn’t have any winning seasons. The whole culture there was really bad.

SLAM: You hear of Cleveland’s bad sports history: The Shot, The Fumble, The Decision, etc.—yet they were lucky to land you in a one-sided trade. Do you have to remind people of that, because if there’s no Championship…

BD: The ultimate goal in any pro sport is to win a Championship. Myself, Mark Price, Ron Harper, John “Hot Rod” Williams, we went into a culture of losing. And I’m telling you, we turned that thing around pretty quickly. But at the end it was just…to win a Championship in Cleveland there were too many things that—[long pause]—like losing Ron Harper, that evaporated that opportunity in my opinion. He was the guy that gave Michael something to think about when we played. And when we traded Ron, I remember Michael telling me, “Man, thank you so much for getting rid of him.” No one was going to be able to match Michael’s ability on the court, but, man, Ron was a hell of a player.

SLAM: The transition from teammate to rival with you and Jordan is interesting.

BD: Even when we played, we were friends. And that’s a Coach Smith thing. All of us North Carolina guys kind of always stick together. I remember I had a bad game against the Bulls and the next night we played again. Michael came out and he’s like, “Alright, get your game going,” and we’re playing him. And he’s like, “Get your game going, you know what you can do.” He was talking about his own teammates: “You know what you can do to these guys. Go to work.” There’s always that camaraderie as North Carolina teammates. That’s always been much deeper than any pro relationship or any relationship on a basketball team.

SLAM: You brought this culture of racing to the Cavs. Larry Nance enjoyed it. You had a teammate named “Hot Rod.”

BD: Larry was a blessing when he came from Phoenix. I’ve always been involved in racing, building race cars and I was always kind of alone. My team, they thought I was crazy. I’d talk to them about racing; they didn’t want to hear nothin’ about it. But when [Nance] got there, we spent a lot of days after practice working on his pro modified dragster and we got to know a lot of the NHRA guys who lived locally there…so we were in hog heaven.

SLAM: For the uninitiated, how would you describe certain personalities in Nascar, past or present, and how they relate to the NBA?

BD: This [sport] relies upon the car, the machinery. A $5 part can cost you a race. So that’s the difference. Personality-wise, there’s only one or two guys. When you look at a guy like Jimmie Johnson, who has intense focus, Jimmie Johnson is one of the few people I’ve seen who has got that cold shark, dark eye at times. I walk up to Jimmie sometimes and he’s in that race car and he has that same distant look in his eyes that Michael had when he was focused. I see the ultimate competitor in Mark Martin. He reminds me a lot of Larry Bird. Mark just will not quit. Mark just continues to work on his game, work on his ability. And Larry was the same way.

SLAM: You were out of the League when racing and the NBA merged in a tragic way. Bobby Phills, your former teammate, passed away while drag racing. That must have been one of the hardest things you’ve had to deal with.

BD: It was. Bobby was a good friend. I admired Bobby. He’d come from Southern University and made his way into what was kind of like the NBDL at the time, the CBA. He worked real hard, and he came to Cleveland, got called up because we had a couple of people that were hurt. And he came to Cleveland and I never will forget, the first time he walked into the locker room, he was scared to death. His locker was across from mine. And he was just sittin’ there, and he was trying to be calm and cool and he was so nervous. I went over and started talking to him. He was a tremendous physical specimen, just really strong. Didn’t have the greatest basketball skill, but was a tremendous competitor. Got to know him real well. Him and his wife Kendall became really good friends. It was a hard day when we lost Bobby—such a young guy with so much going for him, had some young sons there and was just getting settled, had become the guy that was the linchpin in Charlotte and was just starting to enjoy the fruits of his labor when he lost his life, so absolutely a hard day.

SLAM: On the brighter side, you played in a phenomenal era for big men. Who gave you the hardest time and who did you enjoy going up against?

BD: The guy who gave me the hardest time, night in and night out, was Sam Perkins. We played together at Carolina. It was the way Sam played. He could shoot threes. So then I’d have to go out and guard him. And if I didn’t, he’d shoot it, and then when I did it took me off the backboard so I couldn’t rebound. So I’d have horrible statistic nights against Sam. It was just aggravating guarding him. But the best center ever was Olajuwon. In my mind, he’s the best ever. I don’t even know if it’s close. And I always had great games against him because I was a lot bigger than he was and I was a lot slower than he was, so I didn’t react to his fakes really well. I stayed on the floor a lot. I think if you asked him, he’d always say that I read him very well, and I did. But I had a tough time scoring against him, too, because he’s so quick. So we would have games and I’ll never forget: We played against each other and he’d score 16 and I’d score 12; he’d score 11 and I’d score 14.

SLAM: How do I drive a car better?

BD: How do you drive a car better? I don’t know what your skills are like. But the one thing you can do—

BD: Now, that’s bad. One thing you can do: Give yourself plenty of distance. Be very patient. Constantly check your mirrors. Be patient. 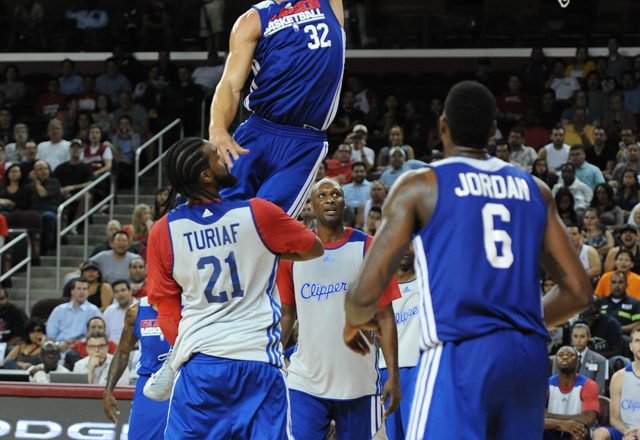