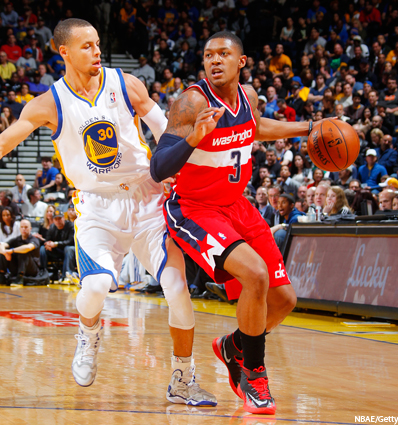 Bradley Beal leans against a steel barricade in the Ernest N. Morial Convention Center in New Orleans, minutes after wrapping up an early All-Star Friday practice with Team Hill for the 2014 BBVA Compass Rising Stars Challenge. Near the end of the morning’s media availability, as Beal smiles and jokes about his Big Easy diet plans—“I won’t be eating nothing healthy,” he jests—a member of China’s LeTV crew asks the 6-5 shooter who, in his mind, is the best point guard in the NBA.

The reporter follows up: “What about SG?”

“Who?” Beal asks, leaning in to hear the question again. “Shooting guard,” says the reporter, through a thick accent.

“Brad Beal,” the second-year 2-guard answers before—sensing where this line of questioning is going—cutting off the next question with, “Trevor Ariza, Nene, Gortat. All 5.”

Sure, Beal is skirting the foreign reporter’s question. But he does it with the silver-tongued Midwestern charm teammates and fans have grown accustomed to since the Wizards made him the No. 3 overall pick in the 2012 Draft. And, while no sane basketball savant would argue for a single member of Washington’s starting five as the L’s best at his position, that core had the Wiz at 28-28, fifth in the East at press time, hurdling toward the franchise’s first post-season appearance since 2008—when Beal was just a 15-year-old sophomore at Chaminade Prep in St. Louis, not yet a twinkle in DC’s eye.

Buried in his team-first response about the game’s best individuals, though, is a suggestion that, with pause, isn’t as sarcastic as the rest. Bradley Beal will one day soon be in the discussion for the label of the NBA’s best shooting guard.

Today, it may sound outlandish to say out loud, but consider: The position is thinner than ever, and Beal plays it like a prototypical 2. As greats like Kobe Bryant, Dwyane Wade and Manu Ginobili begin to fade to black, Beal will assume a spot among the top options at shooting guard, challenging contemporaries like James Harden, and maybe DeMar DeRozan, Klay Thompson or Victor Oladipo. He has plenty to work on, sure, but he already has a silky J, can finish at the rim and, in his second NBA campaign, has shown a killer instinct that’s propelled a once-laughable Wizards team to new heights. At just 20 years old, he’s also four years younger than Harden and DeRozan, three younger than Thompson and one year younger than Oladipo. Marinate on that for a minute.

So where does Beal see himself now—when he’s not messing with an international TV crew? “I have no idea. I wouldn’t even rank myself right now,” Beal says, adding moments later, “I gotta stay humble and just continue to work and work and try to be the best 2-guard in the League.”

So far, just past the midway point of the 2013-14 season, Beal is averaging 17.0 points, 3.7 rebounds and 3.3 assists per game, and shooting 42 percent from three-point range. Six games into this season, Beal set a new career-high with 34 points (including six triples) in a loss at Oklahoma City. In January, Beal blew by Beno Udrih for a game-winning layup with 6.9 seconds left to beat the Knicks at Madison Square Garden.

And days before jetting off to the Crescent City for All-Star festivities in February, he again set a new career-high, this time with 37 points in Memphis, on 15-24 shooting. Above all, of course, he’s helped the Wiz remain in the thick of things in the East.

“Hopefully, these last 30 games I can improve my play. But for the first half of the season, it wasn’t too bad,” Beal says. “I accomplished a lot of my goals, percentage-wise, individually and what we wanted as a team. Now, I have to continue to get better, strive for greatness and be the best I can be.”

Not “too bad” considering Beal played on a team-imposed minutes limit which capped his nightly burn at 30 ticks of playing time for most of the first half of the season, as he worked his way back to full strength from a stress injury in his right leg re-aggravated in November. He’s already matched his games started from his rookie year, in which he picked up All-Rookie Team honors and finished third in ROY voting. Lest you forget, Beal has played little more than one full season’s worth of NBA basketball, after just one year at the University of Florida. In his case, the word “potential” hardly seems strong enough.

“I think he can be great,” says Wall of his backcourt mate later that same day from NOLA, here representing Washington in his first-ever All-Star Game appearance. “I think if he would have been healthy most of the year, playing the way he was playing, he might have had an opportunity to be an All-Star also.”

Wall, the Draft’s top pick two years prior to Beal’s arrival, is the Wizards’ leader and floor general. Winning the Draft Lottery in 2010 and landing Wall was a franchise-changer for DC. But, with all due respect to players like Kirk Hinrich, Jordan Crawford and Nick Young, it wasn’t until he got a proper running mate that Washington could escape the doldrums of the Eastern Conference cellar (and the butt of jokes League-wide). Now, with Beal’s star rising beside him, the Wiz can boast one of the best young backcourts in the NBA. But don’t expect them to settle for just being in the conversation.

“I think we’re both improving our games and I think we’ve got a chance to be one of the best backcourts in the League,” says Wall. “We want to be the best. There’s a lot of good 1s and 2s, but if we keep developing and winning games, we’ll be fine.”

Just how far have the Wizards come since the days of Swaggy P, Agent Zero, Pierre and, um, Andray Blatche? Beal casually mentions that during his time in New Orleans, he and Wall have already filmed a commercial for the 2014 NBA Playoffs. The only thing those previous Wizards teams ever filmed was the Cinnamon Challenge for an episode of “The Nick and JaVale Show.” For a team with a loyal, long-suffering fanbase, Beal’s emergence represents change that can be believed in.

The rest of Beal’s 2014 All-Star Weekend will include a 21-point barrage in Team Hill’s Rising Stars Challenge win, and a runner-up finish to San Antonio’s Marco Belinelli in the Three-Point Shootout. There to root him on courtside is rapper and fellow Lou native Nelly, who back in the day was a student of Beal’s mother, Besta, at University City High, and would on occasion walk Bradley (or one of his four brothers) to school.

“He coulda went a lot of ways, but he’s a testament to good upbringing, strong parents, determination and work. Nothing was given,” Nelly tells SLAM from the floor of the Smoothie King Center minutes after All-Star Saturday Night comes to a close. “To see where he is now, is something that you dream about for people that you care about.”

Beal came into the League comparing his game to a DWade-Ray Allen mash-up, and chose to wear No. 3, in small part,  because of Allen Iverson. Brash? Maybe. But two years into his NBA career, he’s already gone from capable sidekick to budding star in his own right, and he’s helping lead an upstart Wizards team into uncharted territory.