Brandon Jennings is ‘Auditioning’ for Other Teams This Season 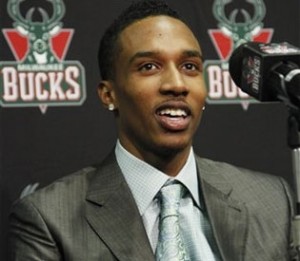 The Milwaukee Bucks and point guard Brandon Jennings have led an uneasy co-existence through four seasons. And after the Bucks elected not to sign Jennings to an extension, he sees the writing on the wall.

Brandon Jennings is understandably disappointed that he doesn’t have a new deal, and tells the local press that he will be playing this season with the goal of showing other teams around the NBA that he’s worthy of a big contract.

From the Journal Sentinel:

“I think I just have to play basketball, come here every day and work hard,” Jennings said. “At the end of the day I’m still under contract with the Milwaukee Bucks. I’m still going to get paid so I have to go out there and perform. Just take it for what it is.”

“I’m going to just play this year out and do what I have to do here,” Jennings said. “The main goal is still trying to win, still trying to make the playoffs. Then I’ll be able to make my own decision. The main thing is, I could say I’m kind of auditioning for other teams, too. The fact if they see what I can do, what I can bring to the table this year for the Bucks, anything can happen in the summertime. Now I’m just going to take it for what it is and ball out, man. Take this as it’s my rookie year again. Take it that I’m the fresh meat that nobody’s ever seen play.”

Jennings goes on to admit that he feels added motivation to prove that he deserves a raise similar to that of other players in the 2009 Draft class. This is a big year for the Bucks’ point guard, as he looks to take his game to the next level.

As a restricted free agent next summer, the Milwaukee Bucks will have the ability to match any offer that Brandon Jennings gets on the market.