Brandon Roy Goes Back to Camp 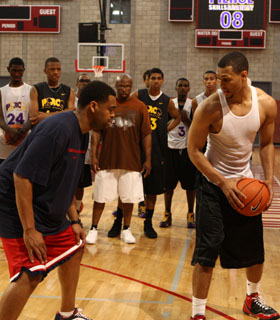 Brandon Roy, who suffered nothing close to a sophomore slump after his Rookie of the Year season by averaging nearly 20 points per game last season to lead the Blazers, filled in as the feature counselor at Paul Pierce’s Skill Academy Camp last week in Los Angeles. Pierce’s NIKE-sponsored camp, which was held in from June 20th-22nd, brings in the top 20 high-school players from each position and 10 of the top college ballers as well at each spot. Roy, who was called by NIKE to step in for the understandably pre-occupied Pierce, shares his thoughts on camp, the Blazers, and Portland with SLAM intern Matthew Eil.

Matt: Brandon, as it says in the name of the camp, this is Paul’s camp, not yours. How come you are here and not him?

Brandon: Well what happened was Nike called me up and asked me to come down and help out. I was up in Seattle and it’s really not a bad flight at all so I was happy to come down. I guess Paul was a little too busy winning a championship or something like that…..

Matt: Yeah not a bad excuse I guess….so how did you personally end up here, are you friends with Paul or you just have a lot of respect for him?

Brandon: I know Paul a little bit just from being in the league and playing against him, but I definitely have a ton of respect for him and his game of course. I would like to think that we have some similarities in our games’. I’m glad they called me to work though, I’m happy to be here.

Brandon: I’ve worked at a few camps before but never one of this magnitude so it’s fun to be here, around so much talent. I really like working with the high schoolers especially, they want to learn so badly and it’s cool to see that. You can just tell that when you talk as an NBA player they are listening.

Matt: Do you see yourself in some of these kids?

Brandon: Totally. I mean when you think about I’m not that much older than some of them, so it wasn’t too long ago when I was here.

Matt: Do you have camp memories yourself?

Brandon: Ha, I do actually. I went to Nate McMillan’s (the Blazer’s current coach) camp up in Seattle. It was a lot of fun, I was there with people like Jamal Crawford and Nate Robinson so there was some serious talent there too.

Matt: Ok, so the Blazers won 41 games last season, and that was obviously without Greg Oden. How are you guys feeling for this season?

Brandon: Oh we are excited, there’s no question about that. The draft is coming up so we are excited for that too. There’s definitely a buzz around Portland, Greg is going to be healthy, Rudy (Fernandez) is coming back, and LaMarcus had a great season and is only getting better so we are hoping for big things. We are thinking people are going to want to pay attention to us.

Matt: How is life in Portland? Was it an adjustment for you?

Brandon: I like Portland, and I’m from Seattle anyway so I’m used to the rain. I was ready to go out and live by myself I think, I knew it was going to help me grow. Portland is cool though, it’s a laid back place and that fits me well. I’m a laid back guy, I’m just as happy to chill and watch a movie in my house. I work so hard it’s nice to stay in and rest when I’m not playing.

Matt: You have had two outstanding years since you’ve been in the league, when you left UW could you possible imagine that things were going to go this well for you?

Brandon: Realistically, no not really. I mean of course I hoped that it would be like this, but it’s hard to expect it to happen like this. This has definitely been like a dream come true for me. But having said that, I also work extremely hard to get where I am. I practice hard, and try to improve every single day and get better for every game.