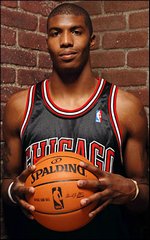 The Tyrus Thomas era may soon come to an end in Chi-Town. And what an era it’s been!

The Bulls and Knicks, according to reports, are in talks about a trade package that would include Al Harrington and the rotting corpse of one Jerome James. Yes, James is apparently still considered an NBA player.

For starters, multiple league executives believe the Chicago Bulls’ shopping of forward Tyrus Thomas could result with him moving sooner than later. As Thomas has rehabbed a broken forearm, the Bulls have had discussions with several teams, but perhaps none as serious as the ongoing dialogue general manager Gar Forman has had with New York Knicks president Donnie Walsh.

Several sources believe the Bulls are agreeable to a package of Thomas and Jerome James for Knicks forward Al Harrington. Thus far, Walsh has resisted parting with Harrington, but discussions are still active and the teams have explored different combinations in recent days that would ultimately deliver Thomas to the Knicks. “Nothing is imminent, but both sides would like to figure out a way to do this,” one league executive briefed on the talks said.

Basketball-wise, the über-athletic Thomas would certainly be an interesting option in a Mike D’Antoni offense. Too bad the Knicks aren’t even remotely equipped to run such an offense. Oh well.

This isn’t really about basketball, though. Should the deal be consummated, it would work out wonderfully for the bean counters on both sides. Thomas becomes a restricted free agent next summer, and New York would have the option of giving him a qualifying offer (approximately $6.2 mil) or cutting him loose and allowing Tyrus to become an unrestricted free agent.

Jerome James is in the last year of his deal, and Al Harrington also becomes an unrestricted free agent next summer.