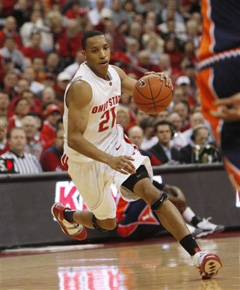 Let’s cut to the chase — can Ohio State’s Evan Turner leapfrog John Wall and become this year’s No. 1 pick? The quick answer would be ‘no’, but in the efforts to make this column longer than 40 words, let’s expand on that. While, at this point, Wall is still almost 100 percent certain to be the first named called by David Stern in June, the unthinkable is starting to happen. People are actually debating whether or not Turner would be the better choice at pick No. 1. While the suggestion of Turner going first overall is mostly being championed by bloggers or fans, and not NBA execs, it is still something worth digging deeper into.

At the very least, Turner seems to have the National Player of the Year awards

locked up this season — posting 20, 9 and 6 a night in a BCS conference will do that for you. And he also seems to have a solid lock on slot number two on all the mock drafts currently floating about on the internet. But why would a NBA team take Turner over Wall with the first overall pick? Here are a few reasons:

By the time the NBA draft rolls around, Evan Turner will have played about 70 more NCAA games than John Wall. Turner has gotten big minute in a very tough conference — the Big Ten — all three of his years in Columbus. While this has been beneficial for his skills development, it has also given him time to develop his basketball knowledge, leadership skills and toughness (he missed just six games after breaking his back while missing a dunk — at least he didn’t break his face like that Grizzlies fan). Just like the player he is most compared to — Brandon Roy — Turner should be ready to step right into the NBA and contribute immediately. While Wall should also be able to do the same, he will probably experience more early growing pains (especially playing point guard) than Turner will.

John Wall is a point guard. He’s a damn good point guard, but he is strictly a point guard on the NBA level. Evan Turner, on the other hand, is Mr. Versatility. The 6-7 Turner would appear to be a shooting guard at the NBA level, but he has proven this year he is much more than that. With the Buckeyes devoid of any natural point guard talent this season, Turner stepped into the void and played the point — and done a remarkable job at it. Even more remarkable considering he was a power forward for the Buckeyes earlier in his career. While he is still probably a natural shooting guard in the NBA, a team could easily plug him in for minutes at point guard and small forward also.

While it is probably unwise for a team with the No. 1 overall pick to base their pick on their current team needs, rather than taking the best player available, that doesn’t necessarily stop NBA GMs from drafting based on need. So if a team has a franchise player already at point guard and need help on the wing, would they consider taking Turner over Wall? What if Minnesota gets the first overall pick? They have Jonny Flynn, having a stellar rookie season and capable of so much more in the future, already running point for them. Plus they also have the draft rights to that Spanish kid — Ricky somebody. Yet they are weak enough on the wing that players like Ryan Gomes and Damien Wilkins are getting major minutes. The only All-Star left on the New Jersey Nets roster is 27-year-old point guard Devin Harris. Do the Nets pick another point guard with the first overall pick or do they draft Turner to help out on the wing? While it is always wise for a team to pick the best player available, we’ve seen time and again that teams don’t always follow that advice.

While John Wall definitely has more potential than Evan Turner, at this point in their basketball careers Turner is the more complete player. While neither guy is a very good outside shooter, Turner is a much better shooter overall, especially from mid-range. He’s also a far superior rebounder. In fact, when you compare Turner and Wall’s pace adjusted stats (per 40 minutes), Turner is superior to Wall in pretty much every category. Plus Ohio State has a higher strength of schedule ranking this season than Kentucky, so Turner has gone up against tougher competition.

In the end, the smart move is still to draft John Wall first overall. Players with superstar potential like he possesses don’t fall into your lap too often. But Evan Turner has ensured that the 2010 NBA Draft has more than one marquee player in it. So whichever team loses the lottery and ends up picking second, they’ll be getting one hell of a consolation prize.

Read more of Jeff Fox at The Hoops Manifesto (or, for mixed martial arts fans, The MMA Manifesto).