Can Mike D’Antoni Transform The Knicks Into Contenders? 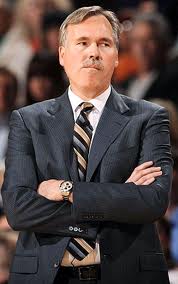 In the final year of his contract, Knicks head coach Mike D’Antoni sits in the hottest seat at Madison Square Garden. This is the season the Knicks are expected to make the leap from celebrity attraction to Championship contender. Amar’e Stoudemire and Carmelo Anthony may battle for the throne as Kings of New York, but at least they are locked into nine-figure, multi-year contracts. Mike DAntoni’s four-year, $24 million contract expires after this season.

With that leap comes increased intensity from the New York media and Knicks fans. Spike Lee’s glass frames will be burning a hole through Mike D’Antoni if the Knicks are not a top three seed in the Eastern Conference in April. It may seem premature to forecast D’Antoni’s demise but this is a franchise that began planning for the free agent classes of 2010, 2011 and 2012 back in 2008. The Knicks are more desperate to bring an NBA title back to the Big Apple than Kobe is to catch Jordan.

Baron Davis brings name-value to the Knicks but he’s never displayed great defensive ability, which is the one area that D’Antoni’s teams have shown glaring deficiencies. Unfortunately for D’Antoni, his dream point guard, Chris Paul, just agreed to exercise his option for 2013-2013 season in Lob City but the Knicks are still expected to take a giant step towards the franchises first Championship in nearly 40 years.

D’Antoni’s teams have always ranked near the bottom of the League in defensive statistics. A large part is based on the up-tempo pace he encourages. The Knicks’ Christmas Day victory may have brought good vibes to Madison Square Garden, but it still raised eyebrows.

The Knicks should not have had given the Celtics a chance to tie the game on the final possession of their matchup Sunday afternoon. This is an aging Celtics team that was missing a trio of big-time contributors in All-Star Paul Pierce, Glen Davis, who signed with the Orlando Magic in the off-season, as well as forward Jeff Green who will miss the entire season after undergoing heart surgery. The Cetlics are now a Championship team in name and reputation only.

While D’Antoni may have experienced a surge of confidence on Sunday afternoon, he may want to wait until the Knicks have made some Playoff noise before announcing the Knicks arrival. D’Antoni has always been the NBA’s Michael Bay. Bay may have directed some of Hollywood’s highest-grossing blockbusters of the past 15 years but the Academy Awards don’t hand out Best Picture nominations for explosions and scantily clad women. Like Bay’s films, D’Antoni’s teams are always entertaining and high scoring but aren’t gritty enough on defense to capture Playoff glory. Knicks fans want NBA Championships—not scoring titles.

It’s one of the reasons that former Atlanta Hawks head coach Mike Woodson was brought in to serve as the team’s unofficial defensive coordinator. The hope within the Knicks organization is that Woodson’s addition will yield the same results Tom Thibodeau did on the Celtics’ bench from 2008 through 2010. Defense wins Championships, after all.

The Celtics won a Championship in Thibodeau’s first season. In his first season as Bulls head coach, Thibodeau’s defensive principles helped Chicago earn the Eastern Conference’s #1 seed with less talent than the Knicks currently have at their disposal.

The Miami Heat’s star studded roster made sure to establish defense as their foundation. Miami and Chicago allowed 91.3 points and 94.6 points per game, respectively last season. The Knicks allowed 105.7.

Phil Jackson’s recent retirement as Lakers head coach doesn’t make matters any better for D’Antoni. Jackson has a habit of showing up on the sidelines of franchises with Championship-caliber talent. New York would be the perfect final destination for his hallowed coaching career. Whether Jackson would come out of retirement to coach the franchise he won two Championships with as a player is unknown. Plus, the ideal coach may be coaching in Brooklyn next fall. Avery Johnson has a reputation for coaching disciplined teams and emphasizes defense. If the Knicks don’t challenge the League’s elite this season, it won’t matter for D’Antoni which coaches will be lining up for the Knicks job next summer, because by then, it won’t be his to lose.