Can Ricky Handle The Hype? 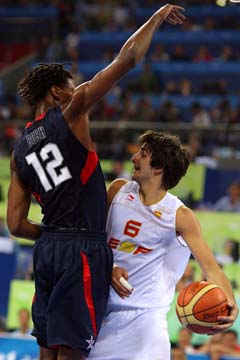 Once again, we call on a commenter to speak to the group. Brad Long (better known as the serial commenter, B. Long) describes himself as a nasty hybrid version of Charley Rosen and Stephen A. Smith…except with common sense and a soul. We’ll let you be the judge…

These are the statements that make me wake up in a cold sweat at night with visions of past The Next’s burning in a hell of unfulfilled and unjustified expectations. Let me first state that in no way do I consider myself an expert on Euroleague basketball or any other league that has teams outside of North America.

If fact a week ago I was asking lots of questions that probably were second-hand knowledge to most SLAMheads across the pond.

“Are Ricky and Brandon Jennings teams in the same league?” No.

“Is there any possible way that they could end up playing each other next year?” Yes.

Thanks Lang. Apparently there is some sort of round robin tourney going on overseas every year where all of the international teams play other teams from different leagues. Who knew? It was news to me.

I realized that for some reason a 17 year-old-kid was making me care about basketball outside of the states (Ok, I do care about the Raptors…a little). Is he really this bad-ass? Is he really gonna be one of the next great point guards of this generation? Why the hell did I even ask myself that last question?

It’s not Ricky’s fault. It’s not (all) Lang’s fault either. He deserves exposure. He’s probably the best 17-year-old playing ball.

Hell, all he does is come off the bench for Spain, play against some of the best grown men in the world (which he has been doing for a couple of years now overseas), and performs great. The kid seems to have a genuine love for the game that you see sometimes get siphoned out of young prodigy’s nowadays.

When basketball becomes more of an occupation to a kid instead of a game, its sad, so for me I’ve really enjoyed watching Ricky come out and play his butt off with that “I can’t believe I just made Jason Kidd look silly” smile on his face. Not star struck, just appreciative of the opportunity to represent his country against the best. And he’s good for at least a couple jaw dropping dribbles or passes a game that come unselfishly and unforced.

So why am I “hating” (I hate the term hating) on him? Well the short answer is that I’m not.

I want to watch Rubio get drafted, play in the best league in the world (for now) and see how his skills translate. I hope he flourishes. Here’s the problem. Ricky has already become, if you value what most reporters who’ve seen his highlights on YouTube and a handful of Olympic games believe, the conscientious #1 overall pick.

It’s a heavy burden for any young player to carry, especially one who will be the youngest in the lottery and making the transition from living at home to life over in the good ol’ U.S. of A already labeled as the hottest thing out of Spain since Penelope Cruz. Coming over to America without that type of hype is tough enough. Why do you think we are having so many guys overseas head back home (it’s not just the money)?

Ask Darko what it’s like when you’re an international player who is taken ahead of Chris Bosh, Dwyane Wade, Carmelo Anthony and Josh Howard and who was compared to KG before he was drafted. How did that work out for him? Turns out comparisons to Travis Knight probably would’ve been more appropriate. Sorry, Travis.

Of course, players from across the pond can be extremely successful, right? No doubt, but how many international No. 1 picks had a significant impact their rookie year, which is normally expected of a guy labeled the best new player in the NBA?

What about their sophomore year in the League? Yao had a nice campaign. Bargnani had a couple of decent games, and Bogut seemed to be getting a grasp of the NBA game (but not necessarily the NBA culture) but none were stars.

But what do all these guys have in common with each other and not Rubio? They’re all seven-footers, who are in the NBA more because of their physical capabilities than their skill set. I’m not saying that just any seven-footer can be successful, but I’ll assume you get my point.

That’s why I’m so anxious to see Rubio play Brandon Jennings. From what I can gather, Jennings is equivalently hyped in the U.S. Their individual matchup in an overseas game could singlehandedly dictate who the No. 1 pick will be. That fact alone shows how much things have changed. Who would have ever thought that, in the age of the age limit, scouts could be just as concerned with an international tourney as they will be March Madness? Crazy.

Here’s another interesting question. Will we find out more about their abilities in this game than we would watching Brandon torch the Pac 10 or Rubio playing against more mature and disciplined but less athletic competition? Who knows?

In all honesty, there is really only one 18-year-old who has ever came into the league as the number one pick and immediately lived up to the hype. I think it’s safe to say that Ricky is no LBJ. Neither is Brandon.

That still won’t keep both from more than likely signing a shoe deal that will have them set for life before most kids their age start college.

Over the next year we’ll see Ricky’s boybandish face slowly appearing on more and more magazines (2 to 1 odds SLAM gives him a cover), billboards, and possibly an ESPN miniseries (I mean come on, Bassy got one) and there is nothing wrong with him taking advantage of those opportunities. Who wouldn’t? But when he’s three years into his NBA career, I just wonder if he’ll have developed into a solid starting NBA point guard with flashes of brilliance and be preparing for a possible All-Star berth or will he have crumbled under the unrealistic expectations and comparisons from today’s fans and media that will without a doubt be piled on to a flashy 17-year-old Menudo looking top pick?

Here’s to hoping for the best for Ricky, even if that means not being the No. 1 pick.