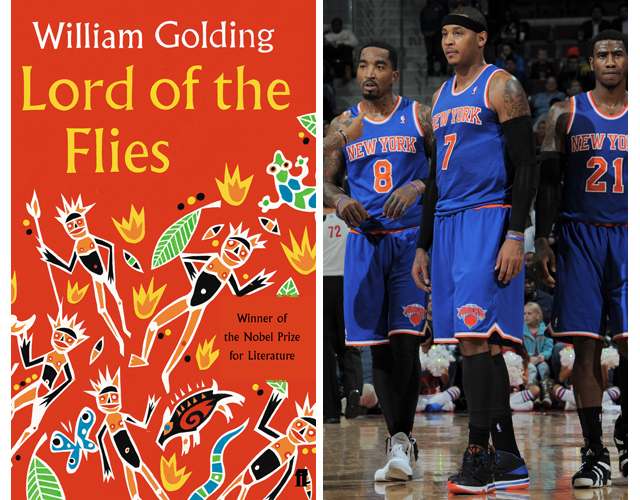 Carmelo Anthony, your assignment is to read Lord of the Flies by William Golding. The setting is a utopian island where there are no adults around to supervise and the inmates run the asylum. Much like the heart of basketball Mecca, Madison Square Garden, it falls into the most frightening of dystopias.

On the island, he who holds the conch (a big sea shell) holds all the power. Just like in your world, where the one with the ball in his hand runs the game. That one would be you at all times, but be careful: when your team goes full savage—and the potential is there—it won’t matter who’s holding the ball. All hell will break loose.

Let’s talk about some of the characters. There’s a happy, intelligent kid named Piggy. His fate is much the same as Jeremy Lin, a nerd who needs to be destroyed. Piggy uses his glasses to harness the power of the sun to create fire. Others believe in worshipping a decapitated pig. It’s like how some people believe in studying player-efficiency stats and others like a guy who can put the ball in the hole. We know what side you’re on there. There’s an enigmatic character named Simon who marches to the beat of his own drummer. If the book were longer he would change his name to Metta World Peace. He randomly appears and disappears much like your friend Amar’e. There’s a character named Roger who embraces the most violent impulses, which could be used to describe the pre-Metta Ron, or Kenyon Martin. Basically, there is a Knick for every child on the island. You are the leader of the Knicks, so you should read up on how to control these people. The key to the whole book is whether you side with Jack or Ralph. Is Carmelo going to be out for blood (and that free agency money!), or is he going to do what’s best for the team? Only you can decide.

These days, people are picking apart your financial plans and loyalty, not to mention your shot selection. What better way to tune all that out than this classic novel?