Carmelo Anthony on Playing in NY: Why Not? 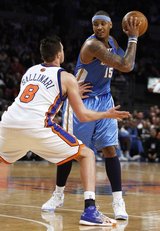 Denver and New York played a thriller of a game at the Garden last night, with Carmelo Anthony and Danilo Gallinari going toe-to-toe. Despite the Knicks being the Knicks, the building was jumping, and ‘Melo must’ve liked what he saw and heard.

Knicks GM Donnie Walsh said that he’d be willing to wait until the summer of 2011 to make a splash in the free agency pool, and following the crushing loss to the Knicks, ‘Melo was asked about the possibility of playing in Gotham in a couple of years.

Anthony told the Denver Post that he wouldn’t necessarily have a problem with it:

Melo scored a game-high 36 points, but after the game he was clearly affected by the loss — he kept the New York media waiting nearly 40 minutes while he meticulously showered and dressed in the training room, digesting the reality of what happened. When Anthony came out, he talked about the gall of Gallinari, who was trash-talking with the all-star. And he also discussed the not-so-ambiguous comments Knicks president Donnie Walsh made to the New York Post, suggesting that even though the Knicks have money to spend this summer, they are looking at rebuilding over the next couple years — and Melo could be available after 2011.

Being a Knicks fan is tough. It’s going to become even tougher, and immeasurably more nerve-racking over the next several months.