Catching Up With Dirk 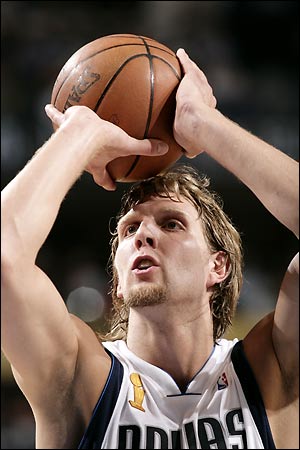 ESPN’s Marc Stein recently caught up with Dirk Nowitzki, and they talked about everything from the big guy’s summer trip to Australia, playing with the German national team in Eurobasket 2007, his goals for the upcoming NBA season, and of course, the 800-pound gorilla in the room: the catastrophic Golden State series.

Hopefully our season is never going to be that short again, so this was my chance to get away for a good four or five weeks. It seemed like Australia was the best spot to go. Nobody cares about the MVP down there. It wasn’t hard at all [traveling] around. It was great, actually.

Have you gone back yet and watched any of the Golden State series?

I can’t see myself doing that any time soon. Maybe I should. Once I get back [to the States], maybe I’ll ask our video guys to put together [clips from] some of my offensive [possessions]. But I don’t really need to watch it again. I already know what they did to me. They played me with a smaller guy, they fronted me, they crowded me.

The good news for Mavs supporters is that their leader sounds like he’s moved on from the Playoff humiliation, and appears ready for another title shot. Still, even though Dirk says that his squad only had trouble with one team and not twenty-nine of them, you have to wonder about their chances going into next season without having made any significant roster changes.

What’s to stop the other 29 teams (the ones that can, anyhow) from adopting G-State’s strategy?