Catching up with Dwyane Wade 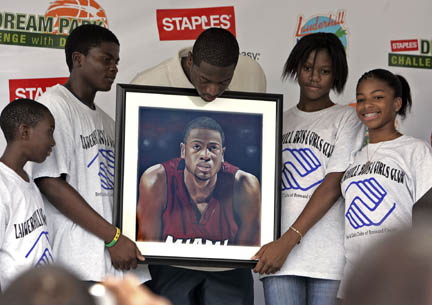 Dwyane Wade hasn’t exactly had the best summer. Sure, he hasn’t been connected with steroids or blood doping or dogfighting or the Mob, but those are extreme examples of “bad.” For Dwyane, things were slightly less dramatic. First there was that first-round sweep by the Bulls, then shoulder and knee surgery, followed by thoughts that the inevitable fallout from the Tim Don-a-gie scandal would hurt him more than any other player. Oh yeah, and having to appear at the ESPYs.

The day I talked to him, in mid-July, it was filming day for the aforementioned ESPYs, and Wade still hadn’t played a minute of basketball since his 24-point, 10-assist Game Four against the Bulls on April 29th (in the interest of fairness, he also had five fouls and seven turnovers that day). It was a cell phone convo (centering mainly on his latest Converse signature shoe which you’ll read more about in the new KICKS) so I couldn’t see him, but for some reason I pictured him in a cream-colored linen suit and a matching fedora. Maybe that means I’ve been watching Miami Vice too much, or maybe I was just thinking of this picture.

Wade’s summers, as usual, are spent in Chicago—“Miami gets too hot for me, man, I gotta get out of there”—although the surgeries prevented him from his usual workout routine with Tim Grover and the rest of the Hoops the Gym crew. “I’m continuing to rehab my shoulder and my knee and I’m getting stronger every day,” he said, “so I’m not worried about that at all. I know I’ve got enough time to get healthy, so it’ll fall back in place.”

Instead, he spent much of the summer in recruiter mode, trying to convince guys like Mo Williams (unsuccessfully, in that case) to join him in Miami. “The only thing I’m worried about is with the East getting better and the West getting better, we’re trying to add a couple pieces to our team, and I’m playin’ like a GM—I’m calling coach every weekend.” He laughed. “I’m staying on top of it and making sure the Miami Heat stays competitive and we’re able to compete for a championship while Shaq is still on my team.”

Superstar thinks his team needs more help, superstar tries to do something about it. Novel thought, that.

“You see the young guys out here, you see other people as you’re goin’ through the summer, and you try and put a bug in some people’s ear that Miami’s a beautiful place to play. And hopefully it comes off that way.”

Smart man. Of course, it doesn’t really matter how good Wade’s salesmanship is. With Shaq still on the books for $20 million per, and a roster chock-full of overpaid and untradeable vets like Antoine Walker and Jason Williams, you can only get so far with the mid-level exception. There’s a good chance that Miami will add no one of consequence this summer.

So the D. Wade abides. He does his charity thing, like the Staples Dream Park Challenge (pictured) in Lauderhill, Florida (where a park got a $25,000 check for a makeover based on online voting), and coming through Zo’s Summer Groove even though he couldn’t play (nice watch). And by the time the season rolls around, he should be good to go (even if he does miss the first week or two).