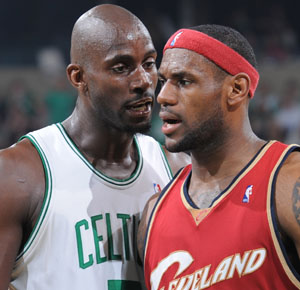 By Jake Appleman and Jon Evans

Due to overall exhaustion (Jon giving his architectural semester’s summation presentation to his Harvard peers and me working till 2AM before tidying up the riot that ensued yesterday in these parts and hopping on a bus a few hours later), we decided to run game notes as a G-Chat that we had while sitting in two different press sections. Bad idea. I think we were boasting a combined 5 hours worth of sleep. I don’t have the time to sift through and fully edit a 3 hour long chat, so I’m going to run a few thoughts and then some choice chat highlights for you guys.

–Let’s get this out of the way: That may have been the worst offensive game of LeBron’s life. 10 turnovers (many came from haphazardly trying to split two or three guys) and 2-18 combine to form a putridity that even I don’t have to explain to you guys. He displayed visible frustration on a few jumpers that rimmed out and failed to finish near the rim consistently–like the awkward guy that struggles to “put it back in.” With this performance coinciding with yesterday’s piece, I’d be lying to you if I told you I wasn’t disappointed. And yes, I kept expecting him to do something amazing in spite of the struggles. Here’s the thing though: When he dropped 50 on the Knicks, he scored 2 in the first quarter. Last night, he didn’t quit on anybody and he fought to the death. Regardless of outcome, these numbers are an aberration, not a trend.

–Kudos (Check plus plus) to big Z. Z was a man on the boards and consistently took advantage of open looks. He was vintage Z, and the Cavs will need him if they are going to pull this off. There were a few possessions when limited mobility and picking up his dribble hurt Z, but overall, you couldn’t have asked for more.

–After a good half an hour of real time on the bench following a comical 0-5 start, Wally “Long Island, STAND UP!” Szczerbiak drained a series of clutch shots for the Cavs, without which the game probably wouldn’t have been so close.

–Kevin Garnett is absolutely f*cking insane. But you already knew that. There were two moments last night when KG was oozing hardwood psycho like a metaphorical serial rapist. Once, as the ball was brought up the floor he did this sort of slide/trance/dance thing which I can’t describe any better than that–maybe he actually slipped, but I doubt it–and when the Cavs were inbounding the ball, sideline out of bounds, towards the end of the game, he was sneaking around like a dude that had a knife in his back pocket. The man is a fire-breathing dragon of intense ridiculousness that would eat your screaming baby alive if you left it in the paint by accident.

–Rajon Rondo was the MVP of the first half. Despite a few turnovers, he controlled tempo during the C’s early run and took advantage of his speed to get to and convert in the lane. Yet, he barely played in the second half because Sam Cassell’s is late game teste’d. Now, I don’t know sh*t about X-factorials (does such a thing exist, mathletes?) but having two 1’s to the maximum power must be awesome. As fate would have it, I headed towards the locker room after the game from my seat behind Mrs. Rondo, who was treated like royalty, as she should be. That must have been one of those induced “speed births”. “C’s section?” Okay, enough.

–James Posey was the unheralded star of the game. His defense on the LeBron and overall impact during the Celtics’ early run in the first quarter were huge.

–The Cavs almost won this game on sheer hustle and grit, by getting to loose balls and by making shots when they absolutely had to. Nothing more, nothing less. Given the need for LeBron and Paul Pierce and Ray Allen to all rebound, it’s impossible to fathom how game 2 will pan out because LeBron could go off, but if the insistence on getting to the rim, crashing the boards and grabbing loose balls don’t follow suit, the Cavs could lose that one too.

8:16 PM me: I think they just turned the arena fluorescent green during intros…was that just me?
8:17 PM btw, I would pay to watch a movie of KG and PP screaming their heads off with that crazy, bobble-heading neck vibration thing that the tech staff added.
jonathan: Yeah – I meant to mention that before –
that green fire is crazy.
That’s why the first quarter is always in this haze
me: “Crazy Train”, smoke and cheerleaders…all that’s missing from this glorious picture is Facebook. Wait, nevermind, just logged on.
Haze is good, whether it’s a beer, or a foggy gas.
me: I have NYC and Boston subway railing residue killing my fingers right now. I’ve got blisters on me fingers! PLAYOFF BASKETBALL!
jonathan: Oooh don’t read lips on that one:
8:19 PM KG: ”let’s go muthaf*ckas!”oh and to confirm, once the reporters left, Bron was bumping Jay-Z’s PSA.
8:25 PM me: I’m implementing the Ben Wallace isn’t allowed to pass while moving in the air rule
jonathan: ooOOOooooOO
8:26 PM me: 0 pts in 4 minutes then 6 in less than a minute for the Celtics. This crowd just flipped its lid.
8:34 PM jonathan: That star shaved into [Boobie’s] head is ridiculously stupid.
me: It’s a “shooting” star…I guess…wow.
8:36 PM me: Wow the C’s are REALLY clamping down. Though the mist has disappeared, we’re in the midst…of a 16-4 run
jonathan: I always wonder why there’s just the one C’s dancer in the Kendrick Perkins jersey
is that like the scarlet letter or something?
zing!
Second Quarter
me: Nice baby hook by Joe Smith. 1995 smiled.
8:42 PM jonathan: nope.
sorry
An MVP wouldn’t have gotten close to being herbed by Josh Smith
8:43 PM jonathan: big quarter for KG
almost outscoring CLE himself
8:44 PM me: yeah, the 18 foot jumper was pretty. Nice quarter close out by Posey. The Cavs are shooting 21% from the floor.
8:45 PM
6-7 for KG to start. dude isn’t playing around
8:50 PM I like this…without lebron on the floor the cavs run Boobie off of a series of screens and then he drives into three guys and gets fouled…
8:51 PM jonathan: Meanwhile, Cassell has totally stopped pretending to know the Cs offense
8:52 PM i guess the free-styling is cool in the 2nd quarter.
me: KG sits down. Cavs down ten. Make a run. NOW. Nevermind, Leon Powe just grabbed a board between 5 guys. Nice space clearing by PJ Brown.
8:54 PM Sasha growing out his hair really gives him an “Em before he blew” vibe.
jonathan: guess that means we cal him Sound Bombing II
8:55 PM me:
“ANY MAN” Pavlovic
Or “ANY MAN (intro)” Pavlovic
Not sure which I like more. Excellent swipe by Boobie, saving a transition opportunity that Posey started with a heads up play, taking advantage of Delonte West, lying all motionless on the ground after hitting a layup.

The Cavs are on pace for a 30 point half…

9:03 PM jonathan: Almost 50% better than the offensive output of the last opponent here
me: Touche.
9:07 PM me: Not to disparage the quality of D being played, but sloppiness has really been a factor so far.
9:20 PM me: oooh Ryan Gomes jersey walking up the stairs. Made my night
9:21 PM jonathan: That’s nothing. I got a Delonte West authentic Celtics st. Pattys jersey in front of me
He’s so conflicted.
me: Ben Wallace fadeaways, when they go in, are a sight to behold.
Third Quarter
9:49 PM jonathan: Guy behind me plugged his sidekick into the press row table;
Lookin at me as if i did something wrong.
9:50 PM Steal and slam from Delonte pulls CLE within one. The guy in front of me rejoices…slightly
9:51 PM Bron picks up his 2nd and 3rd personals
9:53 PM me: Z gets to the line and gives the Cavs their first lead since the first quarter.
9:55 PM jonathan: This is what I hate;
9:56 PM Everyone in this arena needs to be standing for Hondo.
MSG will give John Starks and Charles Oakley a standing O in 2.3 seconds.
10:02 PM jonathan: Sugar Ray miss from 3. – 0-4 from the field.
10:03 PM me: LeBron has 7 turnovers, is 1-10 from the floor and the Cavs are up. i mean…
10:04 PM jonathan: helps when Allen and Pierce combine to shoot 2-14
10:05 PM and the team has 17 to’s.
10:06 PM me: indeed
me: Wow. I mean, Varejao shouldn’t be posting anyone up, but Powe’s strength pushing him out of the box was impressive.
10:13 PM jonathan: Ditto as Perk snatches the offensive rebound away as he soars in.
me: Maybe that worked in tandem with Varejao’s herky-jerky-ness.
jonathan: Or just his jerkiness.
Fourth Quarter
10:44 PM
me: BOOBS!
jonathan: Rarely does the emergence of boobs serve to silence a crowd.
me: KG Huge shot. He’s been making shots over outstretched arms all night.
LeBron, not so much. He’s gotta make that. Z got a tip-in from an earlier miss to due attention drawn via penetration, but even if you’re rebounding really well, conversions in dire situations are absolutley necessary.
Duh.
44
NBA Playoffs
You Might Also Like