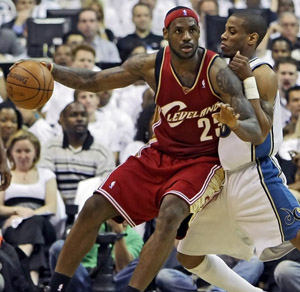 A NOTE FROM FARMER JONES: I’m passing the baton on this one to world-famous Facebook spammer and Saudi Arabian homie Tariq al Haydar. This is because Tariq is my main man, and also because I don’t really have anything else to say about this series.

Well, one last thing, I guess: “You take care, haters.”

Nobody Beats The Wiz (LeBron = Cablevision)

Sandstorms suck. Imagine if a really annoying dude followed you around all day sprinkling black pepper on your face. That’s how the weather has been these past few days, so I was thrilled when it started raining. Wash away the dust particles, rain. What a good omen: “Great day today,” I thought. And it seemed that it really WAS a good omen when I got a message from the Farmer asking me if I wanted to write the recap for Game 6 of the Cavs/Wizards series. This is what Jake must have felt when Ben told him he was going to Germany. But then I calmed down and realized that this was a lot more underwhelming.

As things stand, I’m contractually obliged to tell you to buy this, even though I don’t endorse it myself. Customers who bought that also enjoyed this.

Now that that’s out of the way, I should point out that I was planning to DVR the game, because it comes on at 2 A.M. local time. But I decided to watch it live since I was doing the write-up. Of course, the only thing that sucks more than watching a game at 2 in the morning is watching a game at 2 in the morning alone. So I had to bamboozle someone into watching the game with me. This is somewhat difficult when only 1.3% of your friends actually care about the NBA. My only shot was my boy The Ant, whose Kobe-love makes Holly look like Jemele Hill. I called him up:

Me: Hey, you wanna watch the Cav game?

Ant: LeBron will win the East. Kobe would too, if he was in the East.

Ant: Well, what time does the game start?

Ant: The only thing that outweighs your impertinence is your staggering insolence.

It was. So, Venti Cinnamon Dolce Latte in hand, I waited for the game in monk-like solitude. 11 pages of Infinite Jest, 63 minutes of Ninja Gaiden and 7 Facebook messages later the game was starting. Supposedly. My satellite provider, however, had other ideas. They felt compelled to ignore the game and show a replay of the Argentina-Germany game from the 2006 World Cup instead. If I had a soul, it would have been crushed (Ironically, that’s the same way I felt when I saw Germany beat Argentina the first time). I promptly hurled racial slurs at my TV, which did not retort.

That’s the bad news. The good news is that I managed to catch the highlights on (our version of) NBA TV the next morning. Also, my keen powers of perception allow me to glean a surprising amount of insight from only a handful of clips:

—”You know what: If Bron were 5-11 like Iverson, he’d probably also be accused of being a horrible teammate for not making Damon Jones ‘better’,” I tell my Apple Strudel Pop Tart. I’m not sure, but I think it agrees with me.

—If you’re Antwouwun Jamison, and you foul LeBron, then your face collides with Bron’s shoulder, after which you groggily look up to see that he’s scored, I’m guessing that the whole experience must be unpleasant.

—Much like an in-his-prime Shaq, Boobie evidently coasts through the regular season and saves his best for the Playoffs. Unlike Shaq, Boobie does not have an ongoing feud with Chris Quinn.

—DeBeard’s deep three is impressive. He didn’t have a particularly strong game, but a guy who plays good defense and shoots the three like he does can’t be all bad.

—If LeBron screamed at me, I’d be scared.

—The Corpse of Wally Wojciechowski goes for a career-postseason-high 26 points (10 in the fourth)! In retrospect, the only thing more difficult to predict than Wally’s explosion would be the identity of Kim Kardashian’s next sexual partner.

—Big Z isn’t sure about the number of teams in the NBA who don’t have LeBron James on their roster.

—With the gold vest he inflicted on the public after the game, LeBron is continuing his recent trend of unfortunate haberdashery. Apparently, Craig Sager, the gonorrhea of men’s fashion, is infectious.

—Forget about Bron’s silly 27, 13, 13 triple-double. The real reason the Cavs won: The absence of Darius Songaila.

So that’s it. The Wizards don’t score for most of the fourth, and Cleveland trounce them 105-88. Cavs in 6. Where do we go from here? Well, probably nowhere. Although, as I finish up this recap, I get a text message from The Ant. It’s very succinct: