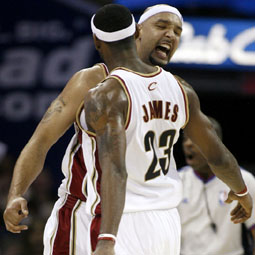 After watching most of the Nuggets-Spurs first half, I swear if anyone misses a layup in the first five minutes of this game, I’m going to throw a large rock through my TV screen.

I just wanted to let ya’ll know that if any of ramblings seem particularly perturbed, it’s because I’m sick. Woke up at 4 in the morning yesterday and my head felt swollen. Ear, nose and throat: a trio that’s performed as well inside my body recently as Tim Duncan, Tony Parker and Manu Ginobili did for San Antonio in Game 1. Only an Endy Chavez drag bunt made the suffering momentarily subside on Tuesday night.

–The Cavs fans were given towels. And now they’re waving them! The part of me that remembers being there in person last year is excited. The rest of me is sick. Did I mention that?

–Z misses a baby hook, but gets fouled after grabbing the board. 17 seconds in, Antawn Jamison has a foul.

–LeBron misses a three. The long rebound bounces to Larry Hughes, who calmly wets a three.

–Another shot of Jamison (sic), er, from Jamison. Brick.

–Another Etan Thomas dunk and a Jamison three, and the Wiz have a 9-5 lead.

–A deep Drew Gooden fadeaway bucket is followed by a made Thomas jumper. Suffice it say, neither team is playing to their strength, but it’s not mattering.

–Eagle notes that Deshawn Stevenson’s numbers have gone down in the absence of Gilbert Arenas. Given Gil’s well publicized psychological domination of Stevenson, I find that fascinating. It’s like the little brother that gets beat on by his older brother, finally gets his freedom, but doesn’t know what to do with himself without big bro protecting him. Like Schevchenko with the ball inside the box this season, I probably could have done better with that, but I feel like I’m under water right now.

–I forgot to mention earlier that Jarvis Hayes took a shot earlier by errantly throwing the ball off the backboard. Oh, and he just bricked a three.

–The Cavs are 4-16 from the field, but they have 6 offensive boards already. By the way, listening to Ramsey speak after Eagle is an interesting experience. It’s like one moment you’re on the highway, the next moment you’re on a back road somewhere in the sticks. At least both are knowledgeable.

–Etan Thomas is on pace for 44 points. In case you’re wondering, that would be a Slamonline columnist record for an NBA game, playoffs or regular season.

–LeBron posts Hayes. Hayes does a good job of staying at home on LeBron, forcing him into a missed fadeaway. Next time down, no mistake from LeBron: He drives right by Hayes, who gives King James an easy And-1 by trying to hold him on the blow-by.

–After another bucket by King James, who is now awake, Brendan Haywood, the 7 foot thorn in Eddie Jordan’s side, gets to the line to tie the game at 23. That’s where we stand at the end of 1.

–The Wizards start the quarter with a Darius Songalia jumper and a Roger Mason three. If you told a Wizards fan in January that their team would begin the second quarter of a playoff game with that sequence, the look on their face would probably define ambivalence.

–Down 4, LeBron gets called for a foul on Michael Ruffin. As Darrell Hammond (as Sean Connery) once said to Will Ferrell (Alex Trabek) during Celebrity Jeopardy: “Ruff, just the way your mother likes it!”

–Boobie Gibson hits a three. Hooray for boobie(s). Or something.

–ROGER MASON JR. 4 Point play. Even so, damn that looks like an ugly set shot. Eagle tells us that Mason signed with a Japanese team before the Wizards. Little did he know, indeed, Ian…

–My sinuses just whistled. And the Wizards are up 39-34. I’m not sure which is more impressive. Probably the latter.

–Drew Gooden gets fouled on a baseline jumper and hits the shot. Tie game 43-all. Gooden hits another J to put the Cavs up two. It’s a 9-0 Cavs run, and Gooden has 7 of the 9. Next time down, Gooden grabs a board off of a LeBron miss, is fouled and hits 1-2. Make that 10 straight. A Jamison floater stops the bleeding, but Gooden comes back and hits a fadeaway in the lane. Drew Gooden, a.k.a. THE BIG DRIZZLE, has 16 points. Gooden comes down again and hits a jumper over Jamison as he’s fouled. AGAIN. Antawn Jamison is redefining how not to play defense. That’s 15 points in 6 minutes for Gooden and 19 and 7 in the game so far.

–The Cavs open up the period doing good things on the offensive end. Gooden, taking advantage a defense that is now more geared towards stopping him, uses a quick ball fake before finding an open Sasha Pavlovic under the hoop for an easy dunk. Larry Hughes patiently waits and uses a screen to bring the ball back inside the arc and drain a jumper. 7 point bulge. Time out Wizards.

–A Z jumper puts the Cavs up ten. A Stevenson fast break layup and a Haywood putback bring it back to six.

–The Cavs supporting cast is doing a good job making their presence truly felt. Z is burying jumpers, Pavlovic is finding seams in the defense with penetration, Gooden just hit another jumper etc.

–If you haven’t seen Brendan Haywood lead a fast break, even if for a split second, you’re missing out. He just stole the ball from Z and took about three power dribbles up the court before making a jump pass while crashing into one of the Cavs. Jamison did end up with an And-1 opportunity; even so, Brendan Haywood is no Marcus Camby with the rock.

–LeBron just pinned Darius Songalia’s layup against the backboard. That ankle must be feeling just fine. The next possession for the Cavs, Bron gets to the line and the crowd begins an “MVP” chant. Nice gesture, but not this year, folks.

–Has Jarvis Hayes even made a shot? I was worried for a second there that I was going to look it up and the boxscore would say he’d made one tonight, and I’d look like a fool. Nope, he’s 0-8.

–Haywood and Varejao get into it; well, it’s mostly Haywood anger, as he talks some shit into Varejao’s floppy hair. It was funny. I looked at the replay and you can’t actually see Varejao’s ear, so it looks like Haywood was just talking into his hair.

The Wizards claw back into a bit, it becomes a back and forth affair and the Cavs hold on. Predictably, even though the 73 combined points in the quarter came as a bit of a surprise.

I guessed that Jarvis Hayes would take over 15 shots. He took only 13. I have no doubt if he’d shot even 30% from the floor, he would have had the confidence to make my prediction come true.

But really, the only thing that matters is this: Drew Gooden used to only make it drizzle, now he makes it rain.