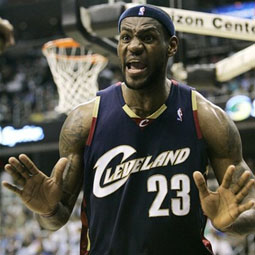 I missed Game 3 because I was out (ironically enough) in Ohio for most of the weekend.

–NBA TV: Technical difficulties lead to the studio team of Bruce Beck and an incoherent Gail Goodrich talking over a barely audible Ian Eagle and Bill Raftery. This is awful. I’m ten seconds away from reaching for the remote to flip on HBO on Demand before the problem is magically solved.

–The two squads start out a combined 1-11 from the floor.

–Etan Thomas writes a well written blog post on Big Z’s head about dunking on him.

–Why are the Wizards still leaving Gooden open?

–It’s basically Antawn Jamison against the Cavs. And Jamison is doing a hell of a job, wetting open threes. He’s 4-6 over all for 10 of Washington’s 16 points. I spent a lot of time around the Jamal Crawford oven this season, and I must admit, the Antawn Jamison oven pre-heats faster, though probably out of situational necessity. I mean, the knobs “second option” and “third option” have been ripped off of the thing, anyway.

–Andray Blatche! Gooden welcomes by drilling a tough, leaning fadeaway. He then beats him to an offensive board and a putback. Blatche responds with a jumper, completely catching everybody off guard.

–Blatche is dominating. If you had told me that Andray Blatche would lead the Wizards to the lead at the end of the first quarter with 5 points in his first 4 minutes, I would have asked you if you talked to your mother with that mouth.

–Roger Mason drills a three. It’s true because I saw it. Mason hits another to put the Wizards up 28-22. Darius Songalia shakes Anderson Varejao out of his socks without even dribbling the ball. Those long drawn out hip fakes seemed like something out of Dance-dance revolution. When Varejao leans the wrong way, Songalia drives baseline and finishes with ease. 30-22 Wiz. In reference to the flashy Songalia hoop:

It’s really quite sad that only 93 people around the country heard that exchange live.

–Donyell Marshall gets called for three seconds. That may have been the most time he spent in the paint during an offensive set all season.

–Perhaps already daydreaming about the picturesque visiting locker room at the Meadowlands, LeBron is 1-8 from the floor, though he’s 8-8 from the line, which makes his regular season free throw woes seem years ago. 32-all.

–Donnell Taylor throws a sick bounce pass on the break to a streaking Jamison for the sweet finish. Take it all in, peoples; you’re never going to witness anything quite like this again. Another nice pass from Taylor, this time to Darius Songalia, and then he converts a spinning reverse layup. And-1, with the “correct English,” as Raftery puts it. Donnell Taylor is the second quarter’s Andray Blatche.

The Wizards build up a 9 point lead, but the Cavs aren’t going anywhere. The lead fluctuates, and the real test for Washington’s bid to win a game in this series is going to come in the fourth.

A ridiculous LeBron layup, with correct English, of course (“No profanity”-Raff), puts the Cavs up 66-65. The Wiz regain the lead at the end of the quarter. In a somewhat related note, I would love to be a part of a Spanish language broadcast of tomorrow night’s Nets-Raptors game so that I could talk about a pretty Jose Calderon layup having the proper “Español” on it. I would be sure to include language barrier breaking puns and intimate Spanish description. I would be all over that, spitting cognates like Ghostface spits darts.

–A Big Z putback brings the Cavs to within 75-74. Z has 15 rebounds, which is somewhat an indictment of Washington’s obvious lack of mobile size.

–The Wizards are having a hard time sticking Z after he screens for teammates.

–Antonio Daniels misses a layup with the shotclock expiring.

–LeBron on a jump-pass finds Z right under the hoop. Cavs up 3. 59 seconds left.

–Jamison loses the ball off his foot. Good D from Eric Snow.

–Z buries a baseline jumper (and the Wizards). 93-88. He screened LeBron and then floated away from the play, making it tough for the Wizards to rotate back to him.

–Down 5 with time running out, the Wizards go to…JARVIS HAYES?!?!?! That about sums it up.

Despite the close games, the Cavs did what they were supposed to. Which was conserve energy against a CBA team that gave its all. There will be a real test waiting for them in round 2.

It’s very possible that the best thing that’s going to come from this experience for Washington will be seen during next year’s playoffs when Blatche, Taylor and Songalia lend support to Washington’s big 3.

Give the Wizards credit for fighting valiantly, and kudos to Jamison for shouldering the load to the best of his ability. Go get a massage, homie.

This series was less entertaining than George Bush dancing with African drumming bands, but at least there were no mixed messages.