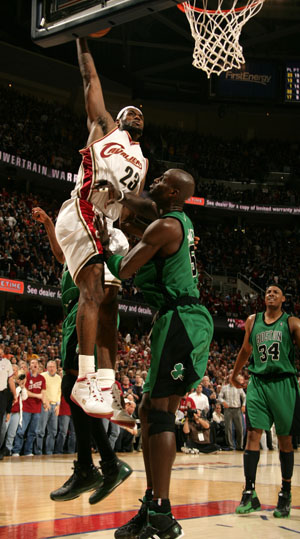 Watched the whole game with my mom.

–LeBron is picking the Cs apart early with his passing.

–KG has all of Boston’s early first quarter field goals, beasting inside and wetting jumpers. Water is wet and KG is sweat, and sweat is water.

–After LeBron rumbles through the paint like freight train, mom opines: “Well, thank God he’s a basketball player and not selling auto insurance. He’s doing what he was meant to do.” I think the Geico Gecko has already made his presence felt.

–Apparently Delonte West is battling bad allergies. What is he allergic to, being consistently awesome?

–It’s a seesaw affair early. It feels like the Cs are getting cleaner looks at the rim, what with the Cavs scoring on a tough midrange floater from Boobie and a 3 point play from LeBron.

–Mom on Anderson Varejao: “Is that a good aerodynamic haircut?”

–A pretty Joe Smith fade–career metaphor?–puts the Cavs up 23-21 to end the quarter.

–LeBron gets after Pavlovic and Doug Collins praises his leadership. A little while later, Collins notes that LeBron has only made shots after absorbing contact. Such all encompassing absorption; LeBron was either a roll of paper towel or a writer in a past life.

–Relevant stats via DC/TNT/A truck: The Cavs have started 7-9 for the period; Rajon Rondo has taken more shots than Paul Pierce and Ray Allen combined.

–Mom, on Pierce wrapping LeBron up and dragging him into the crowd: “YOU CAN’T DO THAT!” I doubt there was another mother in the stands that felt the same way…

–Ray Allen is doing a fantastic impression of the mouse in my apartment.

–Cs go on a 6-0 run after LeBron picks up his 3rd foul. LeBron is visible on the bench, yelling at his teammates: “MOVE THE BALL. F*CK!” Good job, TNT. How LeBron managed to yell an asterisk into a curse word is stunning.

–A Z tip and two Boobie free throws sandwich a Ray Allen pull up, putting the Cavs up two heading into the half.

–Wally Szczerbiak and Ray Allen basically audition side by side in the remake of a crappy recent flick that starred Mark Wahlberg. You might have heard of it.

Szczerbiak impresses the casting director most with an 18 foot bank shot, but Allen nails more lines.

–A seemingly haphazard volleyball tap from Z leaves LeBron wide open at the 3 point line with the ball. He missed many shots on this night, but this much needed trey went down. Cleveland just had a moment.

–Rajon Rondo is hot. Sam Cassell is not. Maybe because one invariably gets cold on the bench.

–JOE SMITH! (Those two words just say so much)

–P.J. Brown and Sam Cassell run a pick and roll that was actually born in 1957.

–A beautiful no look from LeBron to Joe Smith puts the Cavs up 76-71.

–LeBron drills a big 3 off a bruising screen set by Varejao. Pierce counters with a 13 footer, but Boobie responds with a 3 of his own. The role players are rolling.

–Mom, upon seeing a jump ball: “Ooh they’re doing one of those jumpy things!”

—Acceptable nicknames for the dunk:

A final point: With 8:45 left in the fourth quarter, Daniel Gibson nailed a three. It pushed Cleveland’s lead to five, but that wasn’t what was really important. As he was backpedaling down the court, a smirk crossed Boobie’s face. It was one of those typical “I know something you don’t know” grins. It was really simple, and it read: we’re not losing this game. 6 minutes later, moments before the ROTTERDAMN, another Boobie 3 effectively sealed the deal.