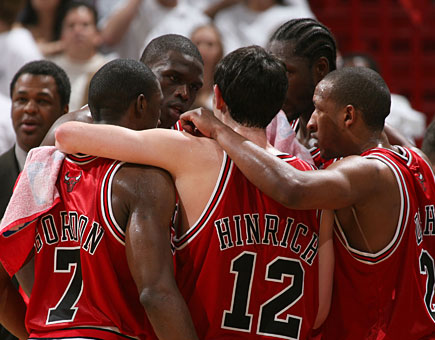 The Chicago Bulls are off to a dismal 1-5 start to the season, and as of today, sit in last place in the Central Division. With an ominous looking six-game road trip staring them in the face, the Bulls are doing everything they can to get out of their slump.

‘We’re not going to do anything crazy,” Skiles said. ”But is 1-5 the right time? [Is] 1-9? It’s not even so much the record. It’s the way that we’ve played. This is different than wanting to hold two guys accountable or anything like that. We have to find a way to get shocked out of our malaise. It’s probably going to have to come initially from me and then see what happens … Everything is in play now.”

According to some of the players, what is most likely to happen is Ben Gordon reprising the 6th man role that he has played during much of his career.

The United Center faithful, judging from their angry chants, which are increasing in volume and frequency, have their own ideas as to how to right the ship. Hint: He currently plays in L.A. and likens himself to a deadly snake.