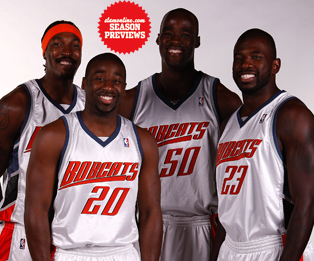 We continue previewing the Southeast Division with the Charlotte Bobcats. You can read past previews here.

words and music by BETCATS

This Land is Your Land (Bobcat Ultra Mega Remix!)
Original song by Woody Guthrie, remix by yours truly!

These Cats are your Cats, these Cats is my Cats
From California, to the New York Island
From the redwood forest, to the gulf stream waters
These Cats was made for you and me

Ever since the Hornets left town, there was an empty space near my lungs. Something was there. The Hornets took it from me when they left. It was my heart. When they left after the 2001

season I felt like I was gonna die. I was only a young gun at the time (4th grade), and life could not have been worse. She walked out on me, that Hornet girl did. Went to New Orleans and didn’t even bother to send a post card or call. I knew that this void could never be filled. I vowed never to love again. That was premature, then a young, steamy lady walked into my life, that lady was a feisty orange and gray cat, named Charlotte, Charlotte Bobcat.

In 2004, she walked through the door. I knew it would never fill the void that occupies the place where my heart was, but she could be like a pacemaker, not a real heart, but good enough to keep me alive. I went to the Champs at Crabtree Mall, bought an orange tee with that fierce Bobcats logo on it. A new relationship was formed, I knew things were going to get rocky, but once I jump into things, I stay through the good and bad.

Fast forward. The 2008-09 season is about to start. Many things have changed, although how good these changes are can be debated.

Here is a look at players by position, and what I think about each one.

Larry Brown — Damn, I thought he was done coaching, after the whole Knicks experiment went totally wrong. But Mike (and the UNC connection) decided to give Larry another chance. Even though I have nothing against Larry (OK, I do, but that’s not why I don’t think they should have hired him), Paul Silas publicly said he wanted to be coach of the Bobcats and it would be a ‘dream job’. If anyone dreams of the Bobcats, they should automatically get the job.

Ryan Hollins — So much potential, great backup, can be a valuable bench contributor.

Nazr Mohammed — A very underrated player, and was a huge asset to the team last year. Even though we had to get rid of Walter ‘Fabio’ Hermann and Primoz ‘The Slovenian Gangsta’ Brezec, he was worth it. He probably won’t start if Sean May is healthy, but will start if Sean May starts to visit Hardee’s and eats seven thick burgers a day again.

Alexis Ajinca — We wasted a FIRST ROUND PICK on this guy. He was a BENCH WARMER in the FRENCH LEAGUE. (When I am yelling at you, I use cap locks.) Larry Brown liked him so much in individual workouts (1-on-0) he decided to draft him. Why? Who knows why, Larry Brown did it, so it will fail.

Emeka Okafor — He just got a HUGE contract (about the size of his forehead), and so he may not give all the effort he did last year. On the other hand, if his numbers start receding (like his hair line!) then he will probably be traded, because the Cats were not happy to give him that contract.

Sean May — STOP EATING, PUT THE DAMN TACO DOWN. NOW!!!

Jermareo Davidson — Had a decent rookie year last season. He will need a coach to help him develop, and it wont be Larry Brown.

Gerald Wallace — One of the NBA’s elite small forwards, he will prove all the doubters wrong this year. He loves to hustle, has great work ethic and always gives 100 percent. Last year an idiot by the name of Sam Vincent made him play power forward. He did as he was told, and got numerous injuries. Larry Brown is not that type of idiot, so Gerald will be at small forward all day.

Jason Richardson — Led the NBA in three-point shots made last season. He is a great player, highly underrated and would be an NBA All-Star if more people got a chance to see him. He can shoot, he can defend and he is a two-time Dunk Contest champ. What’s not to like?

Derek Anderson — On team because he wears Jordan Brand shoes. No other purpose.

Shannon Brown — What can Brown do for you? Nothing, we already have too many shooting guards.

Matt Carroll — Former D-Leaguer, hustles, not good at driving to the basket, is very important to the team.

Adam Morrison — Haters be dammed, if Morrison comes off the bench for 10-15 minutes a night, he will be able to score in bunches. Will have a Leandro Barbosa-like role on a team that can utilize him. The Bobcats aren’t that team.

Raymond Felton — Needs to calm things down. He is our point guard. He might not think that since we used a high first round pick on somebody who plays his position, but that is because Jordan sucks at drafting. He can score, he is an average defender, and he is an above average play maker. Still has time to reach his full potential.

D.J. Augstin — I love D.J., but the Bobcats really don’t need him. Larry Brown hates rookies, and even though D.J. will most likely become a better NBA player than Felton, he needs a coach who can love him as a rookie. That’s not happening this year because Brown is in town. Have fun on the bench!

To put an end to this thing, my relationship with Charlotte Bobcat will never end until she ends it. If she moves out of Charlotte, fine…it will be over. If she keeps giving me false promises of getting better, then turns around and does crazy things like hiring another Sam Vincent or drafting another Alexis Ajinca, it will be over.

If she turns into a WNBA team and trades for Mike Miller, Brook and Robin Lopez, and keeps Alexis Ajinca, it will be dunzo. I am patient in relationships, and maybe it will pay off. For the prediction part, I am saying 82-0 on my Cats. That’s right 82-0. Because if I don’t have hope that there will be better days, my relationship with the Bobcats will be done, just like this article.