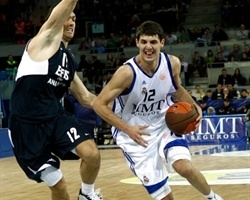 At long last, Nikola Mirotic (one the of best players in European hoops) will don a Chicago Bulls uniform. Both sides have reportedly come to terms on a three-year, $17 million contract
. Per Yahoo!:

Mirotic, a 6-foot-10 forward, was the Spanish League MVP in the 2013 season and brings a well-regarded offensive game to Chicago. He shot 46 percent from 3-point range for Real Madrid in the 2013-14 season, establishing himself as one of the finest jump-shooting power forwards in the world.

After completing his contract buyout with Real Madrid, Mirotic will be paid out of the Bulls’ midlevel exception.

A native of Montenegro, Mirotic was the 23rd pick in the 2011 NBA draft.

I am very happy and excited to announce that next season I will be playing with the @chicagobulls . Today I fulfill a dream. #BullsNation