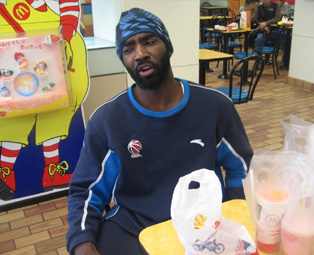 I traveled from my home in Beijing to TaiYuan, Shanxi Province the other day to take in a CBA (Chinese Basketball Association) game. I was catching up with God Shammgod, the great point guard with the better name who played at U-Providence for two years before entering the Draft. He played a year for the Wizards, then set off on a multi-year international hoops journey which he still hopes will lead him back to the NBA. Sham is a great guy and you will be learn much, much more about him in a future SLAM issue. Suffice it to say he is an awesome guy who still has game.

I watched Shamm’s Shanxi squad – the worst team in the CBA – play the Guangdong Tigers, the three-time defending champs and by far the league’s best team. One fact sums it all up – Shanxi has one National Team member while Guangdong boasts five, including pg Chen Jianghua and pf Yi Jianlin, China’s top two young players and definitely the two guys most likely to make it to the NBA. If the names sound familiar, it’s probably because I have done short pieces on both in SLAM in the last year.

The atmosphere in the Shanxi arena was pretty electric, owing almost entirely to the presence of Guangdong, who are treated like the ’96 Bulls here. Maybe even moreso because of all the National Team members – that is the only team everyone in China really cares about. So there were people milling about outside the arena, with big flags and drums, hours before tipoff, plus scalpers milling about and lines of fans outside the hotel waiting for autographs (both teams were staying in a real dump right across from the arena, as was I.)

I rode the bus across the street with Shanxi and hung out with Shamm and chatted as he laced up and got ready to roll. The place probably holds about 5-6,000 and was not bad. Both teams spent a fair amount of time doing regular, lazy shooting as the arena filled up. Then they all gathered around and did choreographed stretches, with much more military precision that you would see from an American team…and that was just the beginning. Each squad then did coordinated drills, running Z formations, high-stepping to the half court line and back, and the like.

There are stringent rules about how much foreigners can play – a total of five quarters per game for both guys combined. It’s not really an issue for Guangdong. Because of their strength, Americans Jason Dixon and Terrance Green are role players. But Shanxi is so weak that they really need Shamm on the floor. His teammate Rashid Byrd doesn’t offer so much and that’s being kind. Actually, he is now a former teammate since he left the squad within two days of this game after a series of disagreements. He is a 7-foot plus center (hence the nickname Seven and Sum Change, which is what he went by as a player for And 1) who has some real skills but not a lot of desire.

When I discussed ‘Shid with his coach he made an ugly face, then made his fingers into a zero and held it up near his temple. Through the transalator he said, “If Rashid listened and played like Shammgod, we would be much better.” No doubt.

Anyhow, were I the coach of this sorry bunch I would without a doubt play Shammgod four quarters, but I’m not and he didn’t. Shamm started on the bench and by the time he came in to start the second quarter his team was down 41-19. They all perked up with Shamm on the floor and the play got a lot less raggedy, but the outcome was already determined.

Shammgod looked good. He still has the handle that you remember if you ever watched him at Providence and he had a series of great drives, where he either finished or drew double or triple coverage then dished it off. He had six assists in the quarter and finished with about 12, but that only barely reflects how well he played; you can’t get an assist if no one else on your team can make a shot, and he dropped perfect passes to wide open guys under the basket only to see them fumbled away or bricked more times than I could count.

Yi and Chen both look good and like legit prospects. Yi finished with 36 points and close to 20 boards. He is stronger than I thought, quite athletic, has good court sense and is a little more street than I thought. Byrd tried to intimidate him with pushes and bows and Yi gave it right back. It’s still a little hard for me to gauge his NBA potential because he was a man amongst boys. If he can maintain that attitude and aggression against guys as big or bigger than him, he is going to be very good. Point guard Chen is supposedly only 17 or so but birthdates of the players here are notoriously suspect. I’d say he’s 19 or 20 and he looks legit too.

Chen is very quick, but under control, has a great handle, is confident and seems to have really good instincts. He and hahmm were a good matchup. Chinese players do not get the greatest coaching and often have trouble really developing their games but Chen is lucky to be from Guangdong and in the best possible place. I am definitely going to keep my eye on him and hope he continues to grow, both literally (he is probably 6-1 and could use 2-3 inches) and hoops-wise.

The final score doesn’t really matter but the margin was close to 40. After the game, I was waiting for Shamm in the hallway ourtside the locker room , a place filled with smoke as people were puffing away. Chen came out and I introduced myself and we chatted as best we could. His English is even more limited than my Chinese and I’m not sure he understands Mandarin all that well, speaking a Guangdong dialect instead. But he understood who I was and said, “Thank you, thank you.”

Rashid came out and I followed him, figuring it was time to go back. Later I would learn that the team owner – a lunatic who sits on the bench berating the refs and telling the coach when to make subs – was talking the team for over an hour but Rashid told him to f*ck off and left. We rode back together on the Guangdong team bus. I was right in the front looking out, and there were hordes of people trying to get close to the vehicle, waving, screaming “Yi Jianlin!” and taking pictures.

We rumbled through traffic across the street. The area right in front of the door was blocked by a truck so we had to park a little bit down the street. The crowds of people waiting there for autographs had time to rush over and crush against the door, screaming “Yi Jianlin!” The team translator said to another American on board, “You take the back and I’ll take the front. Put your shoulder down and push.” I walked off the bus right in front of them and a huge surge clawed at Yi. They followed the plan and just bulled through. It was pretty wild and damn aggressive. A lot of people were asking me for autographs, which I thought was funny. I actually signed a few from people who were persistent even when I said Chinese something approximating, “You don’t want me.” I signed a jacket, a T shirt and several programs.

Then I threw my stuff in the room and went out for a late night McDonald’s dinner with Terrance and Jason. Rashid was pouting in his room and poor Shamm was stuck in that meeting.