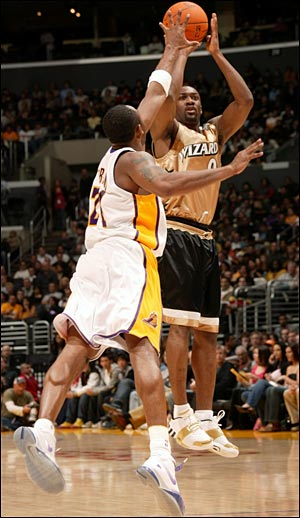 I may have been a liiiiiiitle but hasty to crown Gilbert MVP the other day. Yes, he is scoring a lot of points when not being shut down by the defense of STEPHON MARBURY (!!!!! Seriously!!!) and he’s hit his share of game winners. I am a big Gilbert Arenas fan, just like 95% of the internet.

But, to call him the most clutch player in the league and go so far as to call Kobe jealous of the new king of clutch… well, that I disagree with. I look forward to the day when we can write about an NBA player and praise them for being great without dragging Kobe’s name into it every single time. I don’t see that day coming anytime soon though.

And Gilbert has to hit a LOT more of those to be on Kobe’s level. Kobe’s been doing it for nearly a decade, some of them coming in the Finals. Whether you hate or love (I’m so sick of writing that phrase about him), there is no comparison. And how about those Knicks double teaming and getting the ball out of Gilbert’s hands? Sure it backfired in the most painful way possible, but it took three good passes to beat them instead of one pull-up three.