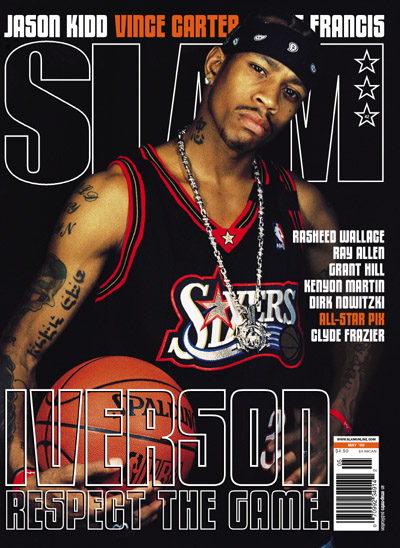 Today was the day I was given the gift of a new computer at work. While our tech dep’t worked on transferring my files over, I had to go dark, as they say on 24. In that time, I picked up an old SLAM from 2000, the oldest Iverson cover I had in the general vicinity of my desk. It’s downright creepy how some things from back then ring so true six years later. Only the names of the players have changed. He plays with ferocious passion, attacks constantly, carries a team of role players, gets banged up, polarizes fans, is loved and hated, etc. Today it’s the same as it ever was.

Ben Osborne wrote the story in this issue, and it describes Iverson as a guy who receives the utmost respect from peers like Latrell Sprewell and Gary Payton, and even Reggie Miller. Six years later, the same respect is there, mostly from younger guys that should be able to stick him but can’t. The harshest critic of his game in the old story Grant Hill, who talks about how he would have a problem playing with a guy that shoots 30 times a game. This was before Grant didn’t play with T-Mac and of course never got out of the first round.

I wish I could just re-run the whole feature, but our archives begin with the issue after this one. Sucks. It’s just amazing to see all of the names in the story that have fallen by the wayside, while A.I. kept on going for a whole decade in the same city, every year being vilified and worshipped at the same time, with a body that is not built for a hardwood pounding.

Players change teams all the time, even Hall of Famers that have been with one team forever. But this is beyond any comparison. He’ll be great wherever he goes, and as much as this saga needs to end, I don’t think I’m ready for the next phase of his career.