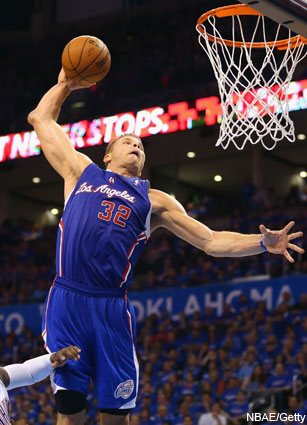 The last several months have been a recurring nightmare for the Pacers, and the Wizards look more than willing to be the new monsters under their beds. Washington trailed for all of 15 seconds as they took it to Indiana, stealing away the homecourt advantage that the Pacers worked so hard to earn all season.

If the national audience didn’t know about Bradley Beal coming in, he made sure everyone knew his name by night’s end. The 20-year-old guard went for a game-high 25 points, knocking down contested jumpers like he was shooting alone in the gym. When things got closer later in the game, the young gun was ready, scoring 14 of his points in the fourth quarter. Trevor Ariza might as well have been on the practice court too; the swingman drained all six of his triples and scored 22 points for the Wizards.

Just like they did in each game of their opening round win against Chicago, Washington came out of the gate like they were shot out of a gun. They jumped out to an 8-0 lead and were flying around on defense, with John Wall (13 points, 9 assists) setting the tone on both ends. Wall snuffed out two fastbreak layup attempts early while setting up his shooters for open looks.

When Indiana came right back with an 11-0 run to start the second, it looked like the Pacers might have gotten some life on both ends.

The Wizards brought the starters back and started to rain in jumpers all over the Fieldhouse. Ariza stroked two of his treys. Beal splashed one in from deep. Nene (15 points, 6 rebounds, 2 blocks) pulled the Pacers bigs out and knocked one down, and just like that the lead was back up to double digits. In all, Washington sank a franchise record 10 shots from behind the arc, with Wall’s speed and penetration generating many of their 16 attempts from deep.

Indiana showed bouts of competence throughout the second half, but could only get the lead under 10 on a few fleeting occasions until a hail of 3-pointers cut down the final margin. While Paul George might have climbed out his offensive sinkhole during the Atlanta series, he slipped right back into it against a swarming Washington defense. PG scored 18 points on 4-17 shooting, with nearly every look coming with a hand in his face. He wasn’t the only Pacer to struggle, as David West (15 points, 12 rebounds) and Lance Stephenson (12 points, 6 rebounds, 4 turnovers) combined to hit 10-28 field goal attempts. Meanwhile, Roy Hibbert’s ineffectiveness in the first round apparently wasn’t just matchup-based. The All Star (yes, 2014 All Star) put up 0 points and 0 rebounds, his third scoreless game and second board-less effort this postseason. Hibbert’s teammates pleaded for their big man to step it up after the game.

“He’s got to be a part of the fight,” West told reporters.

“We’re at the point where we really need Roy and we need him now,” George added.

In part due to their center’s struggles, the Pacers were crushed on the boards, 53-36. Drew Gooden (12 points, 13 rebounds) had 7 offensive rebounds on his own – one more than the entire Pacers team – and took advantage of his second chance opportunities. Marcin Gortat (15 points, 12 rebounds) was just as devastating on the offensive glass, with 6 offensive rebounds to his name.

The Wizards, one of the East’s best road teams in the regular season, went to 4-0 away from home in the Playoffs and get a chance to pad that on Wednesday, while Indiana has two days to figure something out to avoid falling into a 2-0 hole.—Brett Weisband

Chris Paul found himself leading another break, this time he calmly hit a cutting JJ Redick with a diagonal bounce pass that cut through the lane and into his hands for a smooth layup. 82-56, Clippers. At that point, with L.A. holding its biggest lead of the game against the Thunder, it was easy to see the barrage of three-pointers was not coming from Kevin Durant. Russell Westbrook was not going to save the day. The Thunder were cooked.

Two minutes into the fourth quarter, Thunder coach Scotty Brooks had pulled his starters and let Jeremy Lamb and Perry Jones run free. It was over and they had no chance.

The Clippers came out with an intense attitude lead by their floor general Paul, who was unstoppable throughout the 122-105 victory. The Clippers Point God went off for 32 points and 10 assists, highlighted by an amazing 8-9 from 3-point range. So much for all the notes about about CP3 ailing—he looked like his body was dipped in toradol, moving incredibly well all evening, literally getting everything he wanted out on the floor. He donned a Cliff Huxtable-esque Kangol postgame, with a spectacled Blake Griffin next to him and giving reporters little explanation of his unreal stroke.

“Obviously, I like it here in Oklahoma,” Paul joked.

Dude had the ball on a string and looked like he was dancing out there at times.

“I’ve never been past the second round and this is my ninth season,” Paul said. “Every year you feel like you’re going to get back there and it’s not the case. Not only do we have a good team, but it’s also fun to be around each other. Tonight the biggest thing was moving the ball.”

Westbrook led OKC with 29 points and KD added 25. Serge Ibaka was the only other Thunder player in double figures, finishing with 12 points. Griffin posted 25 points, 5 rebounds and 5 assists. Jamal Crawford had 17 points off the bench.

The Thunder players stressed the need to play better defense and defend the three-point line in Game 2. They will get their chance Wednesday night in OKC.—Nima Zarrabi