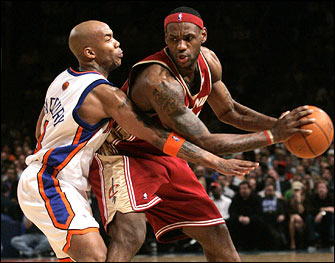 -I think it’s safe to say that Stephon Marbury isn’t a big fan of LeBron James. You might recall that the two of them had a little shoe beef back in March, and now, Marbury is once again hating on LBJ. This time, it’s for his performance at the ESPYs.

You want to make me the clown…I’m not the dude on the ESPYs, getting carried on a throne. I’m not him. I’m the good guy, not the bad guy. I don’t want to be carried on the throne…I just want to walk among the people.

(I’m saddened to announce that Friday’s blog post was Stephon’s last for the NY Post. We’re all a little poorer it. I suggest you go and read through all of his entries; much laughter will ensue.)

-Steve Nash had his charity game over the weekend.

-According to the NY Times, Tim Donaghy was an “above average” ref.

-Darren Rovell of CNBC, with the help of R.J. Bell from pregame.com, is pretty sure Donaghy “was betting the over on the over-under.”

-Would Kobe be a good fit in Portland?