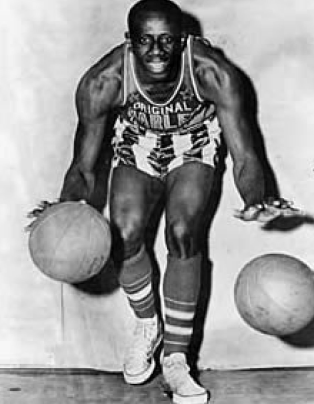 Boxcar Entertainment and TeamWorks Media have put together a truly amazing documentary on the life and career of Goose Tatum. Even the biggest hoops fans on this site may be asking who Goose Tatum is, which is understandable, as Tatum hasn’t received nearly as much recognition as he deserves for his contributions to the game of basketball.

In 1941, when the Harlem Globetrotters were just getting their feet off the ground, Tatum joined the team and changed the franchise—and the game—forever. He absolutely dazzled fans and excited all in attendance—regardless of race, which was an incredible achievement in his day.

The documentary, titled Goose, takes the viewer through Tatum’s entire career. It covers his beginnings as a baseball player in the Negro League to his joining the Globetrotters to his rise as an international superstar to his impact on free agency to off the court successes, failures and tragedies to his all-too-early death and, finally, to his posthumous Hall of Fame induction.

Greats like Dr. J, Jerry West, Oscar Roberstson and even Bill Cosby shed light on just how amazing Goose was. Not only was he an electric entertainer, but he was a truly great basketball player and could have thrived in any league for any team. Despite standing at just 6-4, he excelled in the post, and is credited with the invention of the hook shot (watch the doc if you don’t believe me—Goose had mastered it before Kareem was even born).

Goose did it all—basketball, baseball, managing teams, Hollywood films and more. He was, in his time, one of the most popular athletes in the world, gaining love and support all across the globe. Worldwide recognition isn’t that rare today, but, as the documentary illustrates, it was nearly unheard of roughly 70 years ago. He truly was as unique as they come.

The documentary will be sold via Amazon, Walmart.com, iTunes, Hulu, Netflix and more, as well as in the Hall of Fame gift shop, but we’re dishing out two free copies.

All you gotta do to win is answer the following question in a comment section below: Which current NBA player would you most want to see play on the Harlem Globetrotters?

Be sure to supply a reason for your choice!

Two winners will be chosen and contacted later this week, so get to the comments in quick and make sure to include your real e-mail address so we may contact a winner. Good luck!