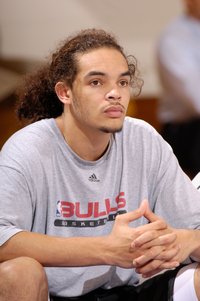 Can’t a guy get his smoke on in peace, and have open liquor as he walks around during the long weekend? Um, apparently not, as Joakim Noah found out the hard way on Sunday.

The 6-11 rookie was carrying a clear plastic cup with an “iced amber-colored” drink as he was walking outside on the sidewalk shortly before 2 a.m., according to Officer Summer Hallett, a Gainesville, Fla. Police spokeswoman. Noah put the cup down when he saw officers heading his way, Hallett said.

Talk about a buzz kill.

Noah was cooperative in his arrest according to the cops, but that probably won’t be enough for the Bulls to overlook this little incident. Look for him to get a slap on the wrist from the organization early next season.