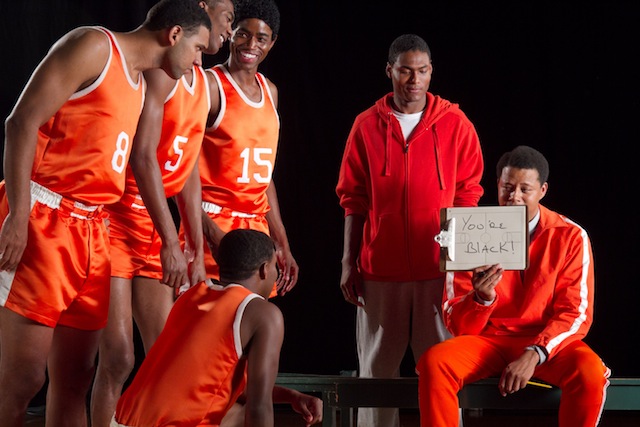 “What game are we playing?”

So begins the trailer for Movie 43—and the acting career of Nuggets forward Corey Brewer, alongside a pair of fellow NBA players and Oscar-nominated actor Terrence Howard.

Together, Brewer, Howard, Bucks center Larry Sanders and Suns swingman Jared Dudley team up for a vignette about (you guessed it) hoops. But it’s just one of the many story lines from the raunchy comedy, which also stars Hugh Jackman, Halle Berry, Kate Winslett, Naomi Watts, Richard Gere and Emma Stone, among others.

Brewer landed the cameo thanks to his affiliation with Relativity Sports, a division of Relativity Media, producers of the film. And despite it being Brewer’s first acting role of any kind, Rusty Cundieff, who directed the scene, praised CB’s skills in front of the camera. “The NBA guys could all have careers in Hollywood; they were that good,” Cundieff says.

Last week, we caught up with Brewer over the phone to find out what filming was like, and what we can expect from Movie 43, which comes out in theaters on Friday, January 25. For more, check out the movie’s official website and be sure to follow @coreybrewer13 on Twitter for movie-related giveaways over the next 48 hours.

SLAM: What was your first thought when you were approached about the role?

SLAM: What was that like when you walked in and Howard was there?

CB: I just started laughing. Because I think about his films like Hustle & Flow. I knew it’d be fun.

SLAM: Did you get to talk to him between takes? Is he a basketball fan?

CB: He was real cool actually. He treated us real good. We didn’t really talk too much hoops but he said he was a fan.

SLAM: Do you have any acting experience whatsoever? Like in a school play or something?

CB: Not really to be honest with you. I thought it might be interesting. I wasn’t really nervous. I just thought it would be fun, but I didn’t realize it’s a lot of work, an acting job.

SLAM: What do you mean?

CB: You’ve got to be on set all day. You basically have to do one scene multiple times until they get what they think they want.

SLAM: What was the funniest moment of filming?

CB: There was a ton of funny moments. Once you see the movie you’ll see how funny it is. Especially Terrence Howard, his character.

SLAM: Who’s the best actor between you, Jared and Larry?

CB: Of course me [laughs]. I think everybody did pretty good considering it was pretty much everyone’s first time acting.

SLAM: Which actor were you channeling? Who was your acting inspiration?

SLAM: What was your teammates’ reaction when they found out you’re in this movie?

CB: I didn’t really tell anybody I was in the movie. They saw the trailer and they were just laughing. They were like, “Man I was watching TV and I saw your face and I just started dying.”

SLAM: Who else from the Nuggets would be a good actor?

CB: We got some characters on the Nuggets. Javale McGee would probably be a good one. Him and Ty Lawson.

SLAM: Do you have any big plans for seeing the movie when it comes out?

CB: I don’t really have a plan yet. I know I’ll do something. I’m definitely gonna go see it when it comes out. I’ll probably have a bunch of people go. And I’m giving some tickets away on Twitter. And some hats that I signed and Ty Lawson signed.

SLAM: What are your favorite comedies of all time?

CB: My favorite comedies are Life and Coming to America with Eddie Murphy.

SLAM: Basketball-wise, you guys have been nearly unbeatable at home this year. Why?

CB: We have a tough atmosphere to come into in Denver, because of the altitude and we have good fans. When you come to the Pepsi Center it’s always tough.

SLAM: Seems like you’re finally settling into a consistent role, too, on a personal level. Has that helped you improve your game?

SLAM: How would you define your role with the Nuggets, exactly?

CB: Right now, I come off the bench, bring a lot of energy…Our second unit is probably one of the best second units in the League. We come in and try to pick it up and always be better than the opponent’s second unit.

SLAM: OK—straight up, why should we go see Movie 43?

CB: It’s going to be hilarious. There are a lot of A-list actors doing stuff you’d never think they would do. Anybody who is not used to seeing nasty, crazy stuff don’t go see it.

SLAM: And your scene?