Can Isaiah Thomas coexist with Dragic and Bledsoe? 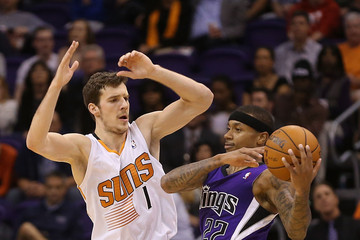 The Sacramento Kings have traded Isaiah Thomas to the Phoenix Suns for the rights to forward Alex Oriakhi and a $7 million trade exemption. Thomas and the Suns agreed upon a four-year, $27 million contract.

The Suns signed Thomas because: they are feeding the beast known as Jeff Hornacek’s system.

For most NBA teams, it would seem unnecessary and ill advised to add a third starter-quality point guard to a team’s roster.

Smart and savvy as a player, Hornacek effortlessly moved from the court to the sideline, and he quickly moved up the coaching ladder. After three years as an assistant coach in Utah, the now 51-year-old accepted a new position to be the head coach of the 2013-14 Suns.

Expectations couldn’t have been lower as Hornacek took on a team most expected to compete in the “Tank for Wiggins” sweepstakes. The Suns did nothing of the sort and barely missed the Playoffs in the tough Western Conference with a 48-34 record—25 wins better than the previous season. Hornacek also just came up short for the NBA Coach of the Year Award, earning runner-up honors behind three-time winner Gregg Popovich.

With plenty of young athletes at his disposal, Hornacek put his own spin on the recently used run-and-gun style and turned the Suns into one of the most efficient, potent, fast-paced teams in the League.

Unlike the Steve Nash era, the Suns head coach uses two floor generals at once. The ability for point guards to keep the ball moving by means of dribbling and penetration is the foundation for Hornacek’s system. He wants his guards to keep the speed at a breakneck level, collapse the defense and force the issue for a full 48 minutes. There isn’t another team in the NBA that is as dependent on point guard play as the Suns.

And that is why Isaiah Thomas is going to play in the desert. In 72 games with the Kings last year, the little guy averaged 20.3 ppg, 6.3 apg and 2.9 rpg. He will offer his new head coach excessive depth at the point guard position, which must fill two spots in the starting lineup—sometimes even three. These guards command the offense on every single possession. Thomas will fit impeccably into his new coach’s up-tempo system with the ability to score in the paint and on the perimeter. (Thomas has had a true-shooting percentage of .574 each of the past three seasons. His ability to shoot isn’t a fluke.)

This is good for the Suns because: they have obtained yet another valuable asset.

General manager Ryan McDonough joined the Suns the same month (May) as Hornacek and started enforcing his own system as quickly as his head coach did. Before the Suns had even played a game, McDonough had ridded his team of any and all hefty contracts while stockpiling future picks in the process. He has made it clear he is committed to remaining one of the more frugal owners in the League. (No Suns player is making more than $8 million next season—pending the expected Eric Bledsoe contract.)

Thomas joins the team on a cheap, team-friendly contract that is well below his market value. He will certainly be tradable if the three-headed juggernaut doesn’t work out as expected.

And there have already been rumors surfacing that revolve around suitors for reigning Most Improved Player of the Year Goran Dragic. The crafty lefty has a similar contract that teams would be more than willing to take on for even less years.

Both Thomas and Dragic fit into their head coach’s point guard intensive structure while being just as valuable for McDonough’s collection of assets. In one way or another, they will be integral to the Suns’ future.

This is bad for the Suns because: holes in the depth chart are being ignored.

As important as it is to supply Hornacek with plenty of capable ballhandlers, he also needs adept big men since he’ll be facing the huge frontlines of the West. Even with 6-11 Channing Frye, who decided to sign with the Magic this summer, the Suns allowed 45.5 points in the paint per game last season—fifth worst in the NBA. Overall, they gave up 102.6 points per game on defense, ranking them in the bottom 10.

No matter how fast their pace may be, the Suns can’t afford to be this inefficient on the defensive end of the floor. If they truly are rolling with Dragic-Bledsoe-Thomas, Phoenix’s front office has decided to make the team’s strengths more powerful and ignore the deficiencies in the frontcourt. (Thomas won’t provide much help defensively, as his short stature frequently puts him in bad situations.)

The Morris twins have shown great promise, especially when on the court together, but neither seems ready just yet to take the next step. PJ Tucker is a serviceable wing that has a nonstop motor but looks extremely raw with his 30th birthday right around the corner. Newcomer Anthony Tolliver is a stretch-4 but nothing more. Rookie T.J. Warren has looked good in the Summer League but may need some time until he can log substantial NBA minutes. While Miles Plumlee continues to look like the brightest of the bunch, 2013’s No. 5 overall pick Alex Len can’t rid himself of the injury bug as he broke his finger in Las Vegas and will miss the remainder of Summer League play.

If Phoenix is really striving to compete in the West, this point guard redundancy could hurt its chances of doing so. The Suns just drafted Tyler Ennis in the first round and have a developing second-year guard in Archie Goodwin. They seemed to have already been in good shape at the guard position before Thomas’ arrival.

Unless Phoenix’s big men make a sudden jump in production, lack of depth at every position other than the two guard slots might keep the Suns stuck in that dreadful and ominous place in the NBA known as the “middle of the pack.”

This will help the Suns late in the season because: their point guards might actually have some energy left in the tank.

Even though Thomas doesn’t fix the aforementioned problems up front, the 5-9 point guard might give the Suns a chance once spring rolls around.

Playing at a rapid pace forces players to exert large amounts of energy for the entirety of their time on the court. Standing around becomes a rare occurrence and substitutions are essential.

For Phoenix, this draining speed took a toll on the players late in the year. Dragic and Bledsoe both sat out chunks of the season, with the latter of the two missing 39 games because of knee surgery. With a playoff bid on the line, the Suns couldn’t muster enough energy to finish the season strong. They went 4-4 in the final eight games, including 0-2 against the teams right in front of them (Dallas and Memphis).

At times, Ish Smith, who was waived earlier this summer, took on a role he wasn’t ready for. Thomas offers a more legitimate source of scoring and distribution as a sixth man, and if the Dragic-Bledsoe duo faces injury issues, the Suns have a player ready to start at a moment’s notice. And since Thomas will be taking many of the guards’ minutes earlier in the season, Hornacek can expect a much fresher and bouncier backcourt when the playoffs approach.

This is bad for Thomas because: he will be taking a step down in responsibility.

Even though Thomas will be sharing many of those 96 minutes at the 1 and 2 with Dragic and Bledsoe, there’s still a glaring problem: He’s starting games on the bench.

When an athlete is elevated to starter status, it doesn’t directly translate into more playing time, but it does change that player’s mentality. Becoming a starter and hearing the PA announce your name before every game inspires a player to accept a new level of responsibility and importance.

Thomas was one of six players to average at least 20 points and 6 assists in the 2013-14 season. He joined an All-Star group consisting of LeBron, Curry, Harden, Irving and Westbrook. It seemed like only a matter of time before the three-year pro stood ready to snatch Cousins’ tip at the start of each game.

Now that will all be stifled. Yes, as Jason Terry, Mo Williams and many other players have shown in the past, sometimes veterans enjoy settling into the role of “sixth man” and even embracing it. But Thomas isn’t at the point in his career when he should have to accept a smaller role and possibly let his development plateau. (When Golden State added Andre Iguodala last offseason, Harrison Barnes didn’t see a dip in minutes but was forced out of the starting lineup. He possibly saw his game plateau in this way.)

This will have a moderate impact on the Suns because: they are still on the outside looking in.

While the East is going through some major transformations and teams are shifting around, the West has stood pat for the most part. The eight teams that made the 2013 playoffs right in front of the Suns are likely still ahead of them. That’s the way of the West, unfortunately.

And maybe that provides some reasoning for why Phoenix is willing to test out a system that features three point guards who should all be starting. This franchise has never been about following the crowd and they’re about to showcase something innovative.

He might not be the prototypical, pass-first point guard the Suns had at the peak of their run-and-gun offense in the mid-2000s, but the former Huskie has a determination unlike any other. Being less than 6-feet tall usually translates into a player being undersized. Thomas will never let himself be undersized when he plays basketball. He’s a pure scorer. He’s a fighter. He will work for his minutes on the Suns.

If the Suns seemed entertaining to watch last year, just wait until Thomas finds his place in the purple and orange. The Playoffs may not be a lock just yet but along with the sun, the future continues to shine bright in Arizona.

Welcome to the fam bro @Isaiah_Thomas2!!

Welcoming my new teammate @Isaiah_Thomas2 to the @Suns happy for you bro..