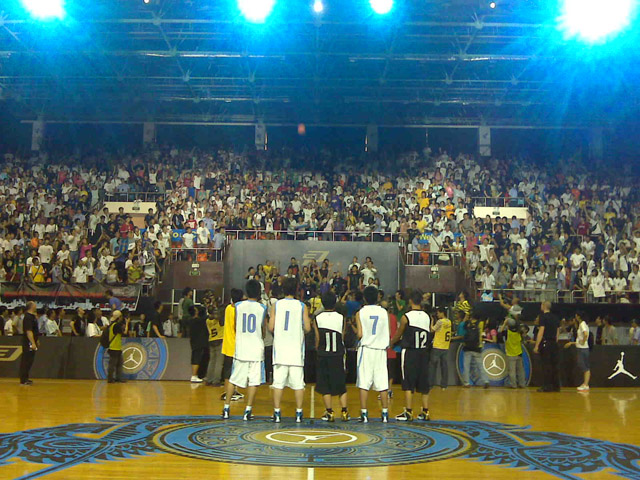 Today in Guangzhou… Wow, where do I begin? Let’s start at the end. Right now, I’m leaving JiNan Sports University Stadium where I was supposed to watch, coach and teach drills with tournament players in an exhibition game and training experience.

Well, I did all of that, but when they told me the score was 42-12 (game was already underway), I was like, “I gotta help this team that’s gettin’ smashed!” So I laced ‘em up and hit the floor.

These kids are fast and know the game pretty well, but I had to show them a little bit of what I know. They paid tribute to my game with a rock star like opening. Screens as big as a drive-in theater and they had me come up out of the floor like Jay-Z at Madison Square Garden.

What’s crazy was! I honestly didn’t know if it was a tribute to me or Michael Jackson (God rest his soul) as they played “Can You Feel It!” as I hit the stage. The energy of the crowd had the makings of a NBA game.

It was also great to see so many fans come out to the Jordan-exclusive retail store for the launch of the Jordan CP3.II China Edition. Not only was the store stocked full of shoes and tees, but there were two life size mannequins that looked as much like me as physically possible. I appreciate the love China is showing me and I look forward to experiencing more.

CP standing with mannequins created in his likeness at a Jordan-exclusive retailer in Guangzhou.

The crowd at JiNan Sports University