Crystal Ball: Choose Your Own Outcome 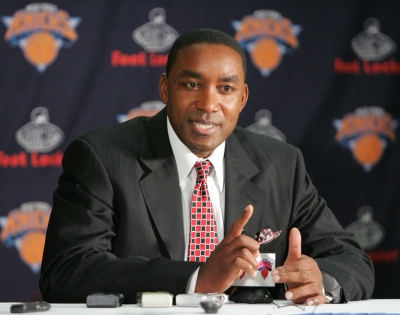 I see the future. Feb. 2008. No I’m not Dionne Warwick-she hates my type, that comparison would fuzz her feathers more than mine-but a NY native whose been subject to viewing the James Dolan/Isiah Thomas/post-Allan Houston train wreck that is NY Knicks hoops or (ready to laugh?) “All Ball” as the MSG ads refer to it. And his failure in the court of law, as massive as it is, is still a mosquito bite compared to his failure as an NBA exec.

My twisted sense of humor enables me to find chuckles in the lopsided blowout beatings and failed 4th quarter surges. But deep down its like watching the opening credits of Lean On Me. Barbaric. Point a finger at what/whomever you feel…Allan Houson’s payday, a snowblower in Florida of a GM, a painful combo of Greg Pop offense (with a 4 guard rotation, none of whom are true PGs) and Don Nelson defense, the chemistry of The White Shadow’s Carver High second team (what up Goldstein and Gomez), Reggie Miller, Ben Gordon, a “bitch” in the front office.

Nothing is more damaging/entertaining than Isiah’s player personel moves. I mean he’s pulled in a few good players (although they don’t mesh), but he also let his Indiana pride show by pulling Jared Jeffries into the fold. And what about Jerome James? I think the news of those acquisitions for New Yorkers was on par with the Christian Lattenner ’92 buzzer beater for Duke haters. The sound of lottery balls and the PSAL championships are the only spring balls bouncing at 34th & 8th. The Portland trade was an unexpected pleasantry. I mean we got some more post scoring for one average player and one over-dribbling shot clock killer. But something tells me if NY is lottery bound by All-Star break, we can expect some standard Isiah/Dolan player movement mayhem and the killer Isiah quotes to bamboozle the NYK faithful. I’ll give you 4 quotes, you choose which of the following will come to fruition

A. “NY is the mecca of basketball. We’re rebuilding. People seek excitement. Thus I feel Darius Miles brings us the athleticism that will get people out their seats”

B. “NY is the mecca of basketball. We’re rebuilding. And being we were having some difficulty down low defensively, I feel that the wingspan and size provided by Shawn Bradley and Kwame Brown can help
us inside.”

C. “NY is the mecca of basketball. We’re rebuilding. And what a better way to rebuild than a NY Native blood related backcourt? I think picking up Sebastian Telfair and placing him alongside his cousin is classic NY basketball. The thought of a Telfair/Marbury backcourt is just Fabolous.” (oops, tasteless pun)

D. “NY is the mecca of basketball. We’re rebuilding. And you can’t rebuild without history. Forget the salary issues, the bottom line is Allan Houston gives us the scoring punch we need. It’s only right he makes his comeback in the place he retired. It’s like Jordan did in Chicago, Allan will do the same in NY.”

As far-fetched as this seems, Isiah has proven that he’s willing to push an 82 Datsun in the Indy 500. Nothing he does is a surprise, no matter how piss poor the judgement. I had a funny dream he signed Lawrence Funderburke to a 3 year contract. The sad part is he probably would. One things for sure, as long as we lose games we’ll never lose a brawl. Ask Denver.