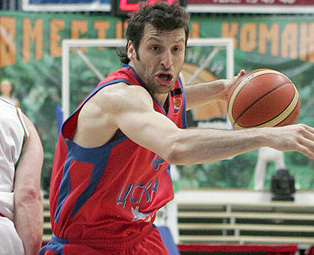 Even though it plays a significant role in the NBA, whether by supplying new, fresh talent, or allowing young American players to hone and improve their skills, European basketball still remains a mystery among many NBA fans. With the NBA rolling along, its smaller, more dysfunctional “sister” league got under away as well. Here’s a short rundown on which teams to look for this season in the Euroleague.

CSKA Moscow (Russia)
Last Year: Euroleague Champions
Notable Additions: None
Notable Departures: None
This Year: A reigning champion that brings backs basically all of its roster is dangerous, very dangerous. (Well, expect for the Heat). CSKA shocked Europe last year with a convincing blowout against Maccabi in the Euroleague Final. With Trajan Langdon and J.R. Holden, this Russian team has two of the most versatile and offensively oriented backcourts in Europe. Throw in returnees Theodoros Papaloukas (highest paid player in Europe at 2.5 million Euros per year) and another American, David Vanterpool, this team reamins the top team in Europe.

Bottom Line: This team will definitely make it to the Final Four, it’s just a matter of who they’ll beat in the final.

Maccabi Tel-Aviv (Israel)
Last Year: Euroleague Runners-up
Notable Additions: Will Bynum, Rodney Buford, Noel Felix
Notable Departures: Anthony Parker, Maceo Baston, Will Solomon
This Year: Maccabi suffered one of its worst summers in history. First, both Anthony Parker and Maceo Baston, regarded as two of the best Americans to ever play for Maccabi, up and left Israel, headed back to the NBA. Will Solomon, who never adapted to the system, was sent packing as well. With Israel engulfed in the war with Lebanon, Maccabi had a difficult time getting high caliber foreigners to sign with them. With the war ending in late August, the team had to settle for the ever-problematic and underachieving Buford and youngster Bynum, who is new to European ball. Maccabi will have to look for its Israeli youngsters Lior Eliyahu and Yotam Halperin, both of whom were taken in this summer’s draft, to take much needed leadership roles on this new and young roster.

Bottom Line: With the new roster mentioned above, along with a brand new coaching staff and high expectations from past years’ successes, this team faces a ton of pressure. With poor showings against NBA teams this summer, it’s safe to say Maccabi won’t repeat last year’s performance. In fact, anything past the second round in Europe will be considered a surprise.

Olympiacos BC (Greece)
Last Year: Lost 2-1 in Eurolegaue Quarter-Final to Maccabi Tel-Aviv
Notable Additions: Scoonie Penn, Arvydas Macijauskas, Alex Acker
Notable Departures: Quincey Lewis, Tyus Edney, Nikos Hatzis
This Year: Olympiacos had great expectations from their off-season accquistions, with emphasis on superstar coach Pini Gershon and former Hornets guard Arvydas Macijauskas, who had this to say about his one year in the NBA: “I want to forget that year. Everything went wrong. A really bad coach, a bad franchise…” Byron is crossing his arms and frowning as we speak. In any case, Macijuaskas tore up his achillies before the season started, and will probably be out for the season. After showing glimpses of immense talent this summer in Japan against LeBronze and co., Greek giant Sofoklis Schortsanitis will want to come out strong, for what may be his last season before the Clippers bring him over to the L.
Bottom Line: The last Gershon-coached team, Maccabi, made it to the European Final Four 5 years in a row. With this year’s Final Four taking place in Athens, Olympiacos is under intense pressure to make it, and win it.

TAU Vitoria (Spain)
Last Year: Made it to Final Four, lost to Maccabi in Semis.
Notable Additions: Freddy House, Kia Peker, Zoran Planinic, Igor Rakocevic
Notable Departures: Kornel David, Casey Jacobsen
This Year: Argentinan star Luis Scola had a pretty dissapointing World Championship, but he is one of the most consistant players in Europe. Brining in Planinic from the NBA was a great move, as Tau’s backcourt was pretty weak last year. Scola, who together with centers Tiago Splitter (Spain) and Kaya Pecker (Turkey), make up a well balanced team, hoping to improve on last year’s 3rd place finish in Europe.

Bottom Line: It’s hard not to see this deep and balanced team making a run at the Final Four. However, it may take time for all the new players to gel, espically with the tough competition TAU faces in the Spanish League. Scola is looking to join his buddies Manu and Fabio over in the NBA, and will want to give a strong season.

Winterthur FCB Barcelona (Spain)
Last Year: Made it to Final Four. Lost to CSKA in Semis.
Notable Additions: Mario Kasun, Fran Vazquez, Jaka Lakovic
Notable Departures: Shammond Williams, Ed Cota, Marc Gasol, Gregor Fucka (holla)
This Year: Barca will look to build on last year’s successful 4th place finish. On paper, this team has one of the strongest collection of stars in Europe, with Gianluca Basile, freshly crowned World Champion Juan Carlos Navarro and the ever-improving guard Jaka Lakovic. However, much like its arch-rival in soccer, Real Madrid, Barca will have a hard time keeping all the new egos in check

Bottom Line: With a strong roster, Braca has high hopes, and a huge buget to meet those hopes. As they’ve done in the past, Barca may accquire more playes during the season. Navarro and Lakovic may turn out to be a dangerous guard combo.

Panathinaikos BC (Greece)
Last Year: Lost 2-1 in Euroleague Quarter-Final to TAU.
Notable Additions: Ramunas Siskauskas, Tony Delk, Sani Becirovic, Robertas Javtokas
Notable Departures: Jaka Lakovic, Patrick Femerling
This Year: Management opened up their wallets this summer, bringing in Delk and Becirvoic. In fact, returning players Mike Baptiste and Fragiskos Alvertis make this team one of the strongest on paper, even though losing Lakovic was tough for the team. Again, like Olympiakos, the team is feeling the heat about making the Final Four on their home turf.

Bottom Line: A meeting between the two Athens teams in the Final Four is basically what the Euroleague is hoping for. Hopefully the fans will throw coins at each other instead of the players, and won’t do much harm. This team could make it far in Europe, and will continue its heated rivalry with their crosstown rivals.