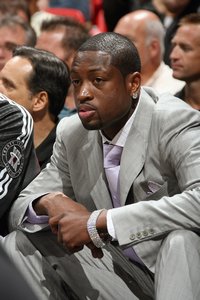 Dwyane Wade became famous for a couple of reasons: His relentless drives to the tin (which often resulted in breathtakingly unbelievable finishes), and the hard falls to the ground as a result of said drives.

As he goes through yet another long rehab on his left knee, Wade is considering altering his game somewhat and becoming more of a jumpshooter.

”It comes into play. It comes into your mind,” said Wade, who averaged 24.6 points and 6.9 assists per game this season and made a career-high 22 three-pointers. “The easiest thing is to become a jump shooter. You have to mix it up. It’s just about getting smarter with the game as you grow.

“I’m going into my sixth year, and I’m smarter than I was in my first.”

While no one wants to see the insanely athletic Wade lazily toss up 20 footers all night, he absolutely must make changes to his offensive game if he wants to have a long and healthy career.

A reliable jumpshot is something every great slasher has had to sprinkle in to their offensive repertoire as they got older (and wiser); some guys just took it too far. Let’s hope Wade doesn’t fall into the latter category.