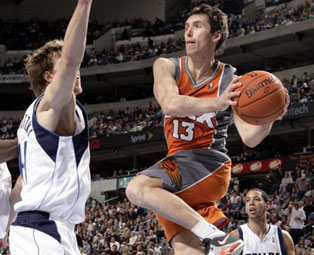 There are two teams in the NBA that never lose. They started out a combined 1-8, but since that game, won by the Mavs, Dallas is 33-4 and Phoenix is 31-3. Dallas is 2-0 in their head to head match-ups this season, so they have a significant edge there. It’s possible one of them could be picked off in the playoffs by someone like Houston or San Antonio, but odds are they will face off in the Conference Finals, and that will be the real NBA Finals.

The Mavs are built for more playoff success that the Suns, but Phoenix is perfecting a new style of ball that might be so unconventional, teams won’t know how to stop it. Amare has been getting healthier and better, and he’s led the team in scoring the past 4 games. The Suns have taken what Barkley called “spurtability” and turned their hot streaks into humbling 30-2 runs of dominance on both ends when they trick teams into running “with” them. Dallas is so deep, and Dirk and Josh Howard have both been playing so well that they can find a different third scorer somewhere every night that makes them impossible to stop. Plus they have big bodies to control the boards and slow down any big man in their way.
On top of all that, these two have split playoff series the past two years, and if you go by NBA history, it is the time for both of them to make their ascension to the next level. Dallas is on schedule to win the championship this year while the Suns need to at least make the Finals to avoid the feeling that they’re just spinning their wheels. Obviously they both can’t get what they want. One of them is not going to the Finals, and their season will ultimately be viewed as a disappointment, as unfair as that may be.
There are really only 2 questions that matter at the highest level this season.

1) Can anyone beat either one of these teams?

2) Who will win their playoff series?