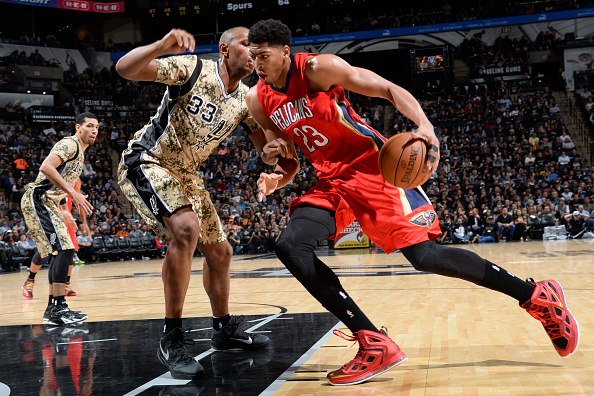 The Clips gave up 62 points to Portland in the first half, but a hot third quarter got LA back in the game. JJ Redick shot 11-13 from the field for 30 points, Chris Paul dropped 22 with 11 dimes, and Blake went for 23 and 6 despite severe nausea. JCraw added 20 off the bench for a Clipper squad that had looked pretty mediocre through its first five games. A convincing win against the Blazers may prove to be just what Lob City needs to jumpstart a run.

CP3 missed a baseline jumper with 17 seconds remaining and his team up two. DeAndre Jordan helped secure the W for Los Angeles by tapping the rebound out to Crawford, who sank two free throws to put the game out of reach. Portland’s frontcourt of LaMarcus Aldridge and Robin Lopez combined for 40 points and 17 rebounds in the loss, while Damian Lillard and Nicolas Batum each approached a triple double with 25/8/7 and 10/8/8, respectively.

After a lackluster game against Toronto, John Wall got back on track with 18 points, 4 assists, and 4 steals to lift the Wiz over the Pacers for the second time in four days. Washington led 32-14 by the end of one and were up 54-35 at halftime until Solomon Hill dropped 12 of his 28 in the third quarter to make things interesting. The Pacers cut it to three with eight minutes remaining in the game, but that’s as close as they would get. Nene (17 points, 7 rebounds, 5 assists), Marcin Gortat (12 points, 7 rebounds), and Kevin Seraphin (13 points, 6 assists) did a terrific job inside all night long, while Indiana simply lacked the firepower to compete down the stretch. The bright spot for the Pacers thus far has been the play of Chris Copeland, who managed to score 14 on Saturday night yet it came on 6-19 shooting.

The Hawks lost to the Spurs and the Hornets back-to-back by a combined five points before breaking through against a struggling New York squad. Kyle Korver put up 27 points including 7 three balls, Jeff Teague dropped 19 and 5, and Paul Millsap delivered 11 and 13. Young gun Dennis Schroder was the spark plug, coming off the bench to score 11 points and nab 5 steals. ‘Melo got off to a hot start before cooling down and finishing with 20 points and 9 rebounds. Iman Shumpert provided 19 (two of which that came on a nice tomahawk slam from an Anthony no-look feed—see below) and remains a legit scorer for NYK, Amar’e contributed 14 and 9, and Tim Hardaway Jr had 15.

Vintage DWade back? He sure showed flashes last night in Miami, whether dishing out no-look dimes, splitting defenders, or throwing down a high-energy dunk. He would finish with 25 points, 8 assists, and 2 steals. Oh, yeah, and that other guy on the Heat ain’t so bad, either. Chris Bosh put up 24 points and 7 rebounds to help propel Miami to a win over the T-Wolves, who found out earlier on Saturday that Ricky Rubio would be out indefinitely with a sprained ankle. Minnesota certainly missed their point guard despite strong outings from big men Thad Young (16 points, 6 rebounds) and Nikola Pekovic (19 points, 11 rebounds). The Wolves’ leading scorer, Kevin Martin, went just 2-9 for 8 points as the Heat snapped its two-game losing streak.

Both DRose and Rajon Rondo sat this one out, leaving Avery Bradley (13 points, 2 steals) and Aaron Brooks (26 points, 8 assists) to take the PG reins for either side. It was Chicago’s fourth game in five nights, which could’ve played a factor in the home team’s slow start. Evan Turner (19 points, 6 assists, 5 rebounds), Kelly Olynyk (18 points, 11 rebounds), and Jeff Green (14 points, 4 rebounds, 4 assists) led the way for the C’s, who had seven players finish in double figures for the second time this season. The Bulls did not go down quietly, however; they mounted a late comeback—thanks in large part to Brooks’ 19 fourth-quarter points—but could never get over the hump. Rose-less or not, the Bulls are a tough team to crack, so the Celtics will feel good about their performance. Joakim Noah posted a 13/11/6 stat line but sat out the game’s final two minutes due to “restrictions.” Pau Gasol went for 19 points and 9 boards, Jimmy Butler had 16 and 5 rebounds, and Mike Dunleavy added 13 in the loss. In addition to Rondo sitting out to get screws removed in his hand, Marcus Smart missed his first outing with a sprained ankle and bone bruise, expected to keep the rookie sidelined for two to three weeks.

STEPH CURRY WITH THE SHOT, BOY! The baby-faced killa dropped a cool 34 (including six three-balls) to go along with 10 rebounds, 5 assists, and 4 steals to hand Houston its first L of the season. Curry has been pretty effin’ unstoppable through five undefeated games, and his supporting cast ain’t too shabby, either. Draymond Green, on pace for a career year, posted 14 points and 8 boards, Klay Thompson put up 11 and 6, and Iggy chipped in with 15. Dwight Howard sat out with flu-like symptoms, which meant that the Rockets’ interior play was non-existent. James Harden’s 22/7/7 looks nice on paper until you realize that he also shot 8-24 from the field and 1-11 from outside. His backcourt mate, Isaiah Canaan, played well with 21 and 4, and Donatas Motiejunas provided 16, but Curry was far too much for Houston to handle as GSW became the only remaining undefeated team in the league.

With eight seconds left, Mike Conley went to the line and made one of two free throws to extend his team’s lead to 92-90. When the ensuing play began, it seemed like the Bucks were looking for the three-ball, but instead, Brandon Knight drove the lane, got hacked, and made a layup with 1.1 ticks left. The fourth-year point guard made the free throw and Courtney Lee missed a shot at the buzzer as Milwaukee gave Memphis its first defeat. Knight finished with 14 points and 6 assists, the Greek freak had 17 off the bench, and Jabari had 13 on 6-11 shooting in 27 minutes. The Grizzlies’ hallmark so far has been their lockdown defense, but they failed to contain Knight on the most important play of the game. Z-Bo (22 points, 14 boards) and Marc Gasol (18 points, 2 blocks) yet again posted big numbers, and Lee made an impact with 11 and 8 rebounds.

World, Anthony Davis. Anthony Davis, world. We’ve known for a while now that dude’s got game, but this year is truly his first taste of superstardom. A stat line of 27 points, 11 rebounds, 6 blocks, and 4 steals is ridiculous on any given night, but it’s even sweeter when it comes with a side of game-winner against the defending champions. Despite San Antonio’s 15-4 run to end the game, Davis stayed calm in the face of adversity and took control with 6.6 seconds remaining by hitting a driving layup with Aron Baynes draped all over him. Just before that, Danny Green was fouled on a three-pointer and hit all three from the charity stripe to put the Spurs up one.

It’s still incredibly early in the season, but is this a statement game of sorts for the Pelicans? The Spurs weren’t shorthanded like they were in a loss versus Houston on Thursday night. Obviously, anybody can beat anybody on a given night in the NBA, but if you’re New Orleans, you might view this as a “Hey, we’re for real,” type of game. Tyreke Evans had 18 points and 5 assists and Jrue Holiday had 15 and 11 dimes as the Pelicans showed out in their red alternate uniforms. Manu Ginobili’s return to the court couldn’t manifest itself into a San Antonio win, even with Tony Parker’s 28/4, Kawhi’s 14/14, and Timmy’s 11/10.