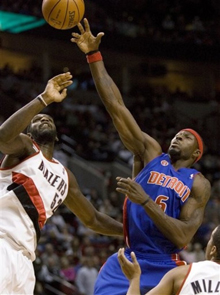 For those who have feared the fro in the past, you’re not alone.

Before we go any further, keep in mind that no one in the NBA will ever go on record saying they’re afraid of Ben Wallace. It‘s not going to happen. But behind closed doors, there’s plenty of cats in the League willing to give him props for dominating things on the defensive end of the floor the better part of the last 10 years.

Think about it, Wallace was named NBA Defensive Player of the Year four times during a five-year span, winning back-to-back awards twice (2002, 2003 and 2005, 2006) to become the first player to pull off the feat in the history of the game. Jordan and Rodman never did it. Olajuwon and Mourning both failed to do so as well.

Along with Dikembe Mutumbo, Wallace is the only individual to take home the hardware on four different occasions since the inception of the honor in 1983. For the record, Sidney Moncrief won things the first time around. Best believe that dude could play some defense back in the day. He got after it, straight up.

Now, let’s get back to talking about Wallace. He is, after all, going to be the topic of conversation the rest of the way. That said, it shouldn’t come as a big surprise for SLAMonline readers to learn that Big Ben is the Defender of the Decade.

Some might think Kevin Garnett, or perhaps fellow post player Tim Duncan, are more worthy of the lofty defensive distinction. Others might give the nod to someone like Kobe Bryant, perhaps Ron Artest, maybe even Bruce Bowen, each of whom has put plenty of opponents on lockdown in the past. There’s no disputing that.

Rest assured, everyone was given a fair amount of consideration, KG in particular. Playing in Minnesota for all those years, unfortunately, hurt his chances.

Wallace, on the other hand, was in the right place at the right time. Eventually, that is. After college life at Virginia Union, a small Division II school, he made a couple of stops with the Washington Bullets (now the Wizards, of course) and Orlando Magic.

He signed with Detroit during the ’00-01 season. And someh

ow, someway, he defied the odds, managed to work his way into the rotation and ended up averaging 13.2 rebounds and 2.3 blocks per game. It was a sign of good things to come.

In his first six years with the Pistons, Wallace made the All-NBA Defensive first team five times (2002-2006) and the second-team once (2007). During that span, he annually ranked among the league leaders in blocks and rebounds.

For his efforts, Wallace was selected to the NBA All-Star team four times in the last 10 years and even graced the cover of ESPN NBA 2K5, a sure sign that his approach to the game was appreciated by fans and corporate America, alike.

Perhaps the lone blemish on his otherwise outstanding decade-long resume was his infamous altercation with Artest that ended up sparking the Malice at the Palace melee in 2004. Then again, Wallace was merely defending his honor, his house, similar to the way he defended things in the paint for the last 10 years, or so.

He spent a couple seasons in Chicago and another two in Cleveland, but finally, Wallace is back in Detroit this year. Low and behold, he’s up to his old tricks, once again in the starting lineup for the Pistons, crashing the boards with reckless abandon while attempting to block each and every shot in his general vicinity.

Odds are, this time around, Wallace won’t come close to enjoying the same kind of success he did a few short years ago, back when everyone feared the fro. Suppose it really doesn’t matter when you consider all the serious damage Big Ben has done on the defensive end of the floor over the course of the past decade.