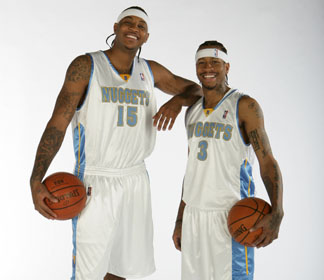 (For all of our season previews as they are posted, go here)

Last year’s NBA season and subsequent off-season were newsworthy to say the least. From LeBron’s trip to the finals and the Spurs dominating performance, to the Tim Donaghy situation, the last dozen months around the league have been very interesting. Those storylines aside, much of the “other” stuff that became news surrounded a little franchise that sits at the base of the Rocky Mountain range, the Denver Nuggets.

The ’06-’07 season for the boys in gold and powder blue was one that constantly put the team in the national gaze. Early season injuries made things tricky for Head Coach George Karl as he tried to figure out his rotation. Things became even more challenging when that little scrap at the Garden occurred, sidelining the team’s top two scorers for the next month-plus. While the Nuggets tried to compensate for the losses of Carmelo Anthony and J.R. Smith, management got active. The midseason trade of Andre Miller to the 76ers for Allen Iverson served notice around the Western Conference that the Nuggets weren’t going to sit back and let the season fall apart. Another move of the ultra-popular Earl Boykins to Milwaukee for Steve Blake provided another cog as the team scrapped its way to the 7th seed and a first-round match-up with the eventual champion, San Antonio Spurs. To be honest, the Nuggets might have played the Spurs better than any other their other foes from last year’s postseason. Yes, they only took one game, but all of the games were competitive (which could not have been said about any of their other series, even Phoenix.)

The Nuggets played with more lineups than most teams in the league (I think the Hornets took that crown,) shuffling different heads due to the aforementioned injuries, suspensions, and trades. As the impending season approaches, George Karl must be licking his chops knowing that he will have his “new” core back for a full training camp.

Despite our editors’ desires that the big two be shipped elsewhere (see Top 10 #112), as a follower and reporter of this franchise, I’m going to have to disagree, I enjoy their presences immensely here in Colorado, immensely.

While the Nuggets’ lineup for the upcoming year looks to be extremely similar to the one that somehow found a way to make the postseason for the fourth straight year, a few slight alterations were made.

Reggie Evans was traded to the Sixers for Steven Hunter and Bobby Jones (oh, if only the Nuggets were getting back the REAL Bobby Jones.) In addition, the backcourt swapped out Steve Blake (who ended up in Portland for his second tour of duty there) in favor of former-Memphis Grizzly Chucky Atkins. While Atkins and Iverson will probably never play together, the newcomer provides some solid experience to go with a little more offense. Who am I kidding? Karl will play the diminutive duo together.

GUARDS: Allen Iverson, JR Smith (probable starters) Chucky Atkins, Anthony Carter, Yakouba Diawara, and Von Wafer round off this group. Expect AI to continue to log HUGE minutes, but the team will profit largely if there is continued maturity and growth out of Smith, which is surely still in question.

FORWARDS: Anthony and Nene (starters) Kenyon Martin, Linas Kleiza (who made huge strides in the second half of last year, Eduardo Najera, and few possible others make up the deepest part of the roster. The last three mentioned could come up huge this year. You know what you get with Najera: hustle, guts, and grit, all of which this team lacks. Kleiza is someone who could become the team’s long-range bomber, as well as be Anthony’s back-up. And then there is good ol’ KMart. The original one; not the one out in Sactown. I get constantly laughed at for thinking this, but I just feel that he could be the X-factor. He hasn’t played meaningful ball in almost a year and a half which almost makes of somewhat of a free-agent pickup (Melo even commented at the Nuggets’ recent Media Day that K-Mart was one of the best free-agent pickups this off-season.) Does he have even a fraction of the bounce and fire that made him feared around the league? If so, Martin, the most untradeable man in the league, owes this team and this town.

After this summer’s international success, Anthony figures to even pump up his gaudy 29-point scoring average of a year ago. Like has been mentioned by this observer, on several occasions, the all-around game of Anthony must explode for this team to truly compete with the conference’s elite. Rebound more, pass the ball more, get more active on defense (which seemed like a complete 180 this summer in Vegas.) All of these areas, if improved, will ensure that not only will Melo establish himself as a perennial All-Star and an All-NBA performer, but will give his team a great chance for continued success.

CENTER: Anchored by the league’s defensive player of the year and its 5th leading rebounder, Marcus Camby, the center spot should be solid. Although, the team still lacks (but doesn’t even really want) a true post presence, the addition of Steven Hunter should help Camby defend and rebound around the glass.

PROGNOSIS: Despite what fellow Northwest Division (and Mountain Time Zone) mate the Utah Jazz were able to accomplish last spring, I have to pick this Nuggets team to finish atop the division. While the influx of young talent (I guess we will see you in a year, Mr. Oden) will make this division more exciting to watch in the long run, the “outflux” of Kevin Garnett, Zach Randolph, Ray Allen, and Rashard Lewis will surely make it less competitive in the short-term.

Nuggets to the Conference Finals!