Deron Williams and Dwight Howard Have Discussed Teaming Up ‘for Years’ 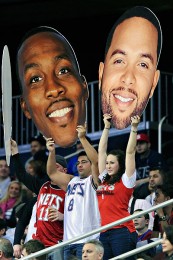 “Brooklyn is going to be huge.” – Deron Williams.

After agreeing to re-sign with the Nets — spurred in large part by the team’s trade for Joe Johnson — DWill now considers Brooklyn one of the NBA’s rare destination cities for superstar players. One guy that Williams doesn’t have to convince too much of this, is Dwight Howard.

On Monday, Deron admitted to reporters covering Team USA practices in Las Vegas that conversations about the possibility of playing together have been taking place between himself and Howard for years.

“We’ve talked about playing together for years,” Williams said, calling the opportunity to team up “a big part” of why Howard has requested that he be traded to Brooklyn. […] “I think he likes the market, this market is a lot different than Orlando,” Williams said. “I think [building something new in Brooklyn] definitely intrigues him. It’s going to be huge.”

“I think we’ll be one of the top teams in the East for sure,” Williams said. “It depends on how everybody jells and comes together as a team. Miami took a year losing in the finals and this year came out and were better.” […] “It would be great,” Williams said. “[Howard is] one of the top five players in the world. There’s nobody like him in the NBA. Andrew Bynum is the closest thing as a low-post presence that likes to play on the block.”

Despite multiple reports that four teams and some 14 players could be involved in a blockbuster trade for Dwight Howard, there is still a long way to go until the big fella lands in Brooklyn, helping form one of the League’s most devastating trios.

For the time being, anyway, all Deron Williams and Dwight Howard can do is talk, dream and hope.